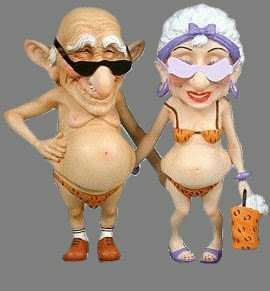 Do you ever get tired of viewing stories like Centenarians Reveal The Secrets To Living A Long Life, or 31 Superfood Secrets for a Long and Healthy Life ?

You know, the kind of articles that are packed with wisdom from near-saints who have survived the decades through “good living.”

I don’t know about you, but I’ve yet to meet anyone who is perfect.

Therefore be wary of advise from centenarians – their memories aren’t really all that sharp after 100 years - and health nuts because they’ll eat nearly anything –regardless of how icky - to live longer (or be skinny).

You’ve heard stories about amazing centenarians who remain spry well beyond their years. What’s their secret? Their daily constitutionals? Their teetotaling disdain for a drink or a smoke?

Well, a recent study indicates, surprisingly, that people who live into their 90s and longer have habits just as lousy as the rest of us.

Nir Barzilai of the Albert Einstein College of Medicine and colleagues interviewed 477 Ashkenazi Jews who were living independently even though they were at least 95 years old. Some were as old as 112.

They all joined the Longevity Genes Project, which is investigating why centenarians live so long.

The bottom line, I figure my chances of reaching an advanced age (I’m 64 now) are about as good as anyone’s. And I can tell you, without hesitation, that I haven’t been (nor will I ever be) a saint.