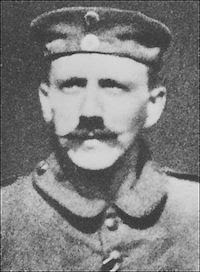 Fate can be a fickle mistress.

Seemingly small acts can cause massive repercussions down the line. There’s no better example of this than one man’s decision not to kill the future Fuhrer of Germany.

The First World War was in its last hours, millions of soldiers on both sides were dead and those who fought on knew the end was near, as did English Private Henry Tandey who served with the Duke of Wellington's Regiment.

In September of 1918, on the French battlefield of Marcoing, he won the Victoria Cross for bravery, one of many medals the 27 year old would win during the 'war to end all wars.'

As the battle of Marcoing raged, Allied and German forces engaged in bitter hand to hand combat. The defining moment for Private Tandey and world history came when a wounded German limped directly into his line of fire.

"I took aim but couldn't shoot a wounded man," said Tandey, "so I let him go." Years later he discovered he had spared an Austrian Corporal named Adolf Hitler.

Hitler himself never forgot that pivotal moment or the man who had spared him.

On becoming German Chancellor in 1933, he ordered his staff to track down Tandey's service records. They also managed to obtain a print of an Italian painting showing Tandey carrying a wounded Allied soldier on his back, which Hitler hung with pride on the wall at his mountain top retreat at Berchtesgaden.

He showed the print to British Prime Minister Neville Chamberlain during his historic visit in 1938 and explained its special significance.

The Führer seized that occasion to have his personal gratitude relayed to Tandey, which Chamberlain conveyed via telephone on his return to London from that most fateful trip.

Henry Tandey left military service before the start of World War II and worked as a security guard in Coventry. His "good deed" haunted him for the rest of his life, especially as Nazi bombers destroyed Coventry in 1940 and London burned day and night during the Blitz.

"If only I had known what he would turn out to be. When I saw all the people, woman and children, he had killed and wounded I was sorry to God I let him go," he said before his death in 1977 at age 86. (Source)