Mine-sniffing rodents: I wish they had ‘HeroRats’ when I was in Vietnam

While serving as a combat engineer in Vietnam (1970), my primary mission was to detect landmines.

Minesweeping then meant a few guys slowly walking along a hostile dirt road and waving a heavy modular mine detection unit back and forth.

We didn’t have the advantages today’s Army Engineers have with mine-sweeping vehicles preceding us. I’m talking “old school” here.

And we sure didn’t have any trained rats to stand in for us! The only rats I remember back then were mean little things that occupied bunkers and hooches.

If I would have known back then what I recently discovered about rats, I’m sure I would have been on the cutting edge for training the furry little beasts to take my job!

But no one thought about such a novel way to detect landmines in the 1970s. It wasn’t until Bart Weetjens came along that the idea of using rodents for mine detection became a rea 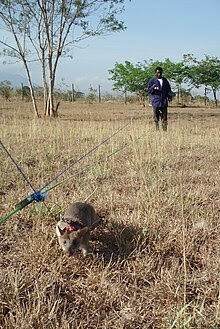 APOPO's mission is to develop detection rats technology to provide solutions for global problems and inspire positive social change. For today, we’ll just look at the rats searching for landmines and leave the tuberculosis sniffing abilities aside for another post.

Due to Weetjens childhood experience, he knew that rats, with their strong sense of smell and trainability, could provide a cheaper, more efficient, and locally available means to detect landmines.

Using African giant pouched rats (they call them HeroRats) to detect landmines has several advantages. The rats are indigenous to sub-Saharan Africa, where they are used and, thus, are well-suited to the climate and are resistant to many endemic diseases.

They are also widely available and inexpensive to procure. Few resources are needed to raise a rat to adulthood, and African Giant Pouched Rats have a relatively long lifespan of six to eight years.

Furthermore, HeroRats do not form a bond with a specific trainer but rather are motivated to work for food. This adaptability 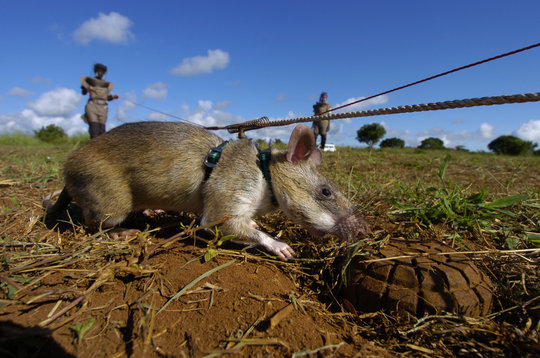 allows for the trained rats to be transferred between handlers.

In the minefields, the HeroRats are too light to detonate a pressure-activated mine by walking over it. Their small size also means that the rats can be easily transported to and from operational sites.

Mine Detection Rats (MDR), the name given to the African giant pouched rats (genus Cricetomys) also used by APOPO, work to detect landmines by using their exceptional sense of smell.

In a minefield, MDRs wear harnesses connected to a rope suspended between two handlers. The HeroRats methodically sweep up and down a demarcated hazardous area and indicate the scent of explosives by scratching at the ground.

The insignificant weight of the rats means they do not detonate a landmine; their scratching solely indicates the presence of a mine. Each suspected area is screened by two animals.

The locations that are indicated by the rats are marked off, and then followed up later by a manual demining team, who detect and destroy the mines.

Full training of a Detection Rat takes approximately nine months on average, and is followed by a series of accreditation tests.

The rats are socialized and then trained through principles of operant conditioning. When the rats first begin their training, they learn to associate a “click” sound with a food reward of banana or peanuts.

Once they learn that "click" means food, the rats are trained on a target scent.

Rats trained to become Mine Detection Rats are taught that when they indicate TNT (the explosive in most mines), they will hear a click and then get food.

After various stages of training which build on the skills learned in the previous stage, the HeroRat is ready to go to work in either a minefield or into the research lab for tuberculosis or remote scent tracing (RST) detection.

(Information and photos Via Wikipedia)

For your peace of mind and safety so do I. But alas, a new generation will be more safe. Now if we could just get rid of war and destructive devices altogether!