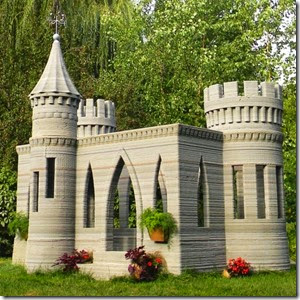 I’ve been watching 3-D technology explode in the last decade with a wary eye.

In 2005, 3-D printing expanded to the hobbyist and home-use market with the inauguration of the open-source RepRap and Fab@Homeprojects.

When it became possible to make your own gun, I was concerned but figured the initial price for the right 3-D printer – $20,000 in 2010 – would prohibit most people from buying one.

That same technology today has decreased in price and now runs about $1,000. So far, it appears that there’s nothing this 3-D technology can’t make. Now you can 3-D print your own home like Andrey Rudenko of Minnesota.

“We've been using cement as a building material for thousands of years — but never quite like this.

Andrey Rudenko of Minnesota used it in a custom 3-D printer to create a tiny castle in his backyard, layer by layer, and next, he plans to build a two-story house. He's not the first to attempt a cement 3-D printer, but this castle is easily the most impressive example of the technique yet. It puts down layers about three quarters of an inch wide and a fifth of an inch tall with remarkable precision, leaving a textured but solid surface.

The castle, pretty as it may be, was only a test run for his real project: building a house. "All interior walls, fireplaces, stairs, some interior elements... I have my own innovative design and I'm going to print with insulation," Rudenko told NBC News in an email. Even the roof will be printed. It needs to be in a warm, dry climate and, of course, things like doors and glass will have to be added, but he's confident it'll work.” (source)