It’s time for some Monday tales.

I’ve got a few stories for you that are amusing and kinda crazy too.

Let’s start with a dog that threw up a diamond ring.

This story begins with a Wisconsin woman who thought her lost wedding ring was long gone five years ago. To her utter surprise she was recently reunited with it in a very surprising way.

Meet Tucker (photo above) who is also known as the family “food burglar.” Two weeks ago, Lois Matykowski of Stevens Point, and her granddaughter were out in the yard enjoying Popsicles on a hot day. That was until Tucker, the family dog, suddenly helped himself to the granddaughter’s popsicle.

After wolfing down the frozen treat, stick and all, Tucker didn’t feel so good and later yakked it up. Two days passed and he was yakking again – this time in the family living room – and low and behold, Mrs. Matykowski’s long lost wedding ring lay in the puke!

The good news is no one is mad at Tucker. As a matter of fact, he’s being treated as a hero! 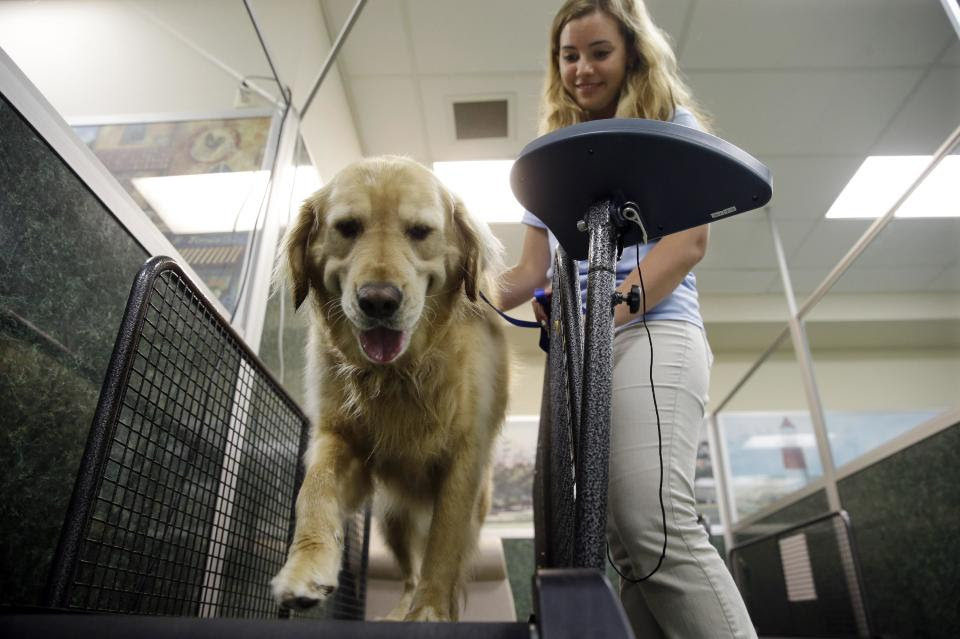 Staff worker Kelli Quinones walks golden retriever Ceili on a treadmill for dogs at the Morris Animal Inn Thursday, June 19, 2014, in Morristown, N.J. Female goldens are supposed to weigh 55 to 70 pounds but overweight Ceili weighs 126 pounds. The facility says she is very active but when they do stair climbing drills, she has to take a pause. (AP Photo/Mel Evans)

It’s not just a people problem: Growing rates of obesity in pets have led to the emergence of fat farms offering “pawlates,” “doga” and “Barko Polo,” doggie versions of Pilates, yoga and Marco Polo to help slim down man’s best friend.

In the U.S., 53 percent of dogs are overweight or obese, up from 45 percent four years ago. In cats, the figure is almost 58 percent, said Dr. Ernie Ward, a veterinarian and founder of the Association of Pet Obesity Prevention in Calabash, North Carolina. Overweight pets can suffer diabetes, joint problems, heart disease and decreased life expectancy, just like obese people, he said. (source)

PUP FINDS ITSELF IN A TIGHT SPOT

A pit bull puppy in Bakersfield, California managed to get his head stuck in the middle of a wheel rim and luckily received help from local firefighters. As reported by the Associated Press, the puppy’s owner brought “Junior” into the Kern County fire station, with the wheel around his neck, hoping to get some help.

After taking photos of the poor little guy, Brandon Hill, the fire department spokesman said two firefighters used vegetable oil to slide the puppy through the hole and free him from the wheel’s grip. Junior is now back home with his owner and seven siblings.

That’s all for now folks!