I’d like to introduce you to three little pigs – two named Wilber and one named Twinkie.

The Wilber’s are fighting for their right to live outside a farm, and Twinkie who won his battle to stay with his people in the city.

I’m sure you’ve heard of therapy dogs. In case you haven’t heard, there’s also therapy pigs (and a host of other animals that shall go unnamed here for brevities sake).

Wilber #1 lives in New York City (Queens) with his owner Nadine Darsanlal, a disabled Navy veteran . He’s a certified therapy pig but the city’s health department doesn’t care. They issued a $500 fine to Darsanlal for keeping a prohibited animal in the city limits.

A local judge said Wilber’s status as legally certified therapy pig was legitimate, but he still ruled against him and Darsanlal has to pay the fine, CBS 2 reports.

In Palm Beach, Florida, a completely different Wilbur is getting heat from a homeowners association none-too-happy with the pig's presence, WPTV reports. 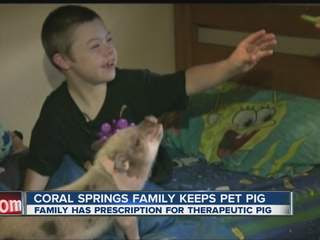 A South Florida family won the battle to keep a pet pig for a young boy with special needs.

Kason Ray has Down syndrome, but getting a therapy dog was out of the question because his dad has severe allergies. Miniature pigs, on the other hand, are hypoallergenic. (story)

I hope you enjoyed, and learned something about, these three smart little pigs who help people lead happy lives.