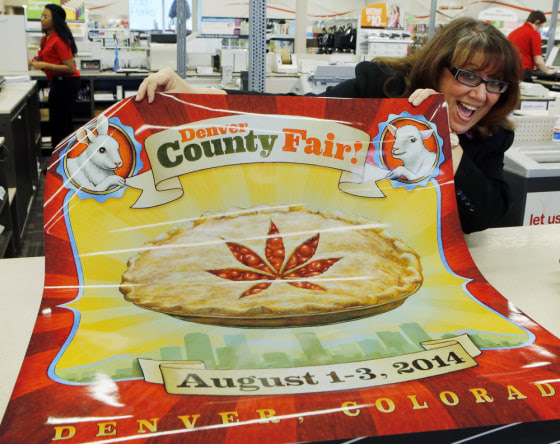 Did you miss me? I took a blog break yesterday.

As everyone on this planet knows … it’s Super Bowl Sunday!

Between the commercials and all the hype – see the Battle of the Puppy Bowl vs Kittens – everything that can be said about today’s Football Game has been said.

So I’m not even going to bother, other than to say, I think the Denver Broncos are going to carry the day.

Having said that, I’m more interested in sharing the news about another bowl title: This summer, the city’s National Western Complex will be home to the world’s first Pot Pavilion Aug. 1-3 during the Denver County Fair.

The announcement of the Pot Pavilion has clearly put the festivities on the county-fair map with the news being reported as far away as Dublin, Ireland and Perth, Australia. It’s going to be interesting to see how this works out as you can’t smoke pot in public, despite the fact the state legalized it for recreational use.

Events will include a joint-rolling contest — using oregano instead of pot — and a Doritos-eating contest, which will likely appeal to those who may have pre-functioned before arrival at the fair.

Marijuana plants will be judged off-site, and the winners will be displayed at the Pot Pavilion.

I think it’s a great idea because there’s going to be a lot of people with munchies and you combine them with all the award-winning pies, pasty, stews, etc., and you have some serious partying down! That’s just the way folks roll in Denver these days!