How much more American is it than to have your beer delivered by drone?

We might as well face up to our fascination with drones. We like to kill our enemies with them and their really great for spying on traffic and giving us tickets.

Hobbyists want to see air space cleared for them when they whip out their drones and demonstrate ways to invade our privacy. I heard about one town in the Midwest that wants to declare “open season on them.”

Personally, I don’t trust them. But entrepreneurs everywhere are waiting to get on the “Drone Train” to deliver their wares. Here’s a good example for you:

“The Internet cheered when Minnesota-based brewing company Lakemaid Beer demo-ed a new way to deliver their seasonal special to thirsty customers fishing on a faraway frozen lake: by drone! But the FAA quickly shut down the plan.

"The problem of ice anglers is they’re way, way out on the lake and they’re there for the whole weekend so we needed a way to keep them in beer," Jack Supple, president of Lakemaid told NBC News.

But days after the company posted a YouTube clip showing a successful delivery of a 12-pack of Frosty Winter Lager ("a nice craft lager, all malt, with an icicle sparkle of hops at the end") by hexacopter, Supple got a call from an inspector and regional supervisor at 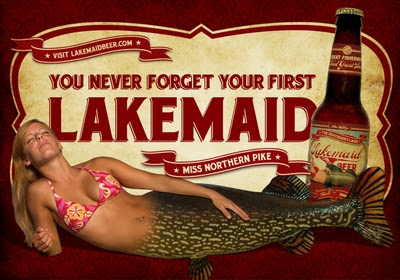 the FAA — whose guidelines prohibit the operation of drones by commercial entities — explaining that the flights were in violation of guidelines.

Now beer-by-drone enthusiasts have signed a statement petitioning the White House to "Force the FAA to issue an Airworthiness Certificate for Beer Drones (BUAV's)."