You’ll Pay for Bradley Mannings Sex-Reassignment Surgery if Has it! 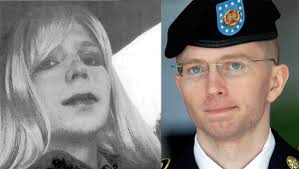 Our prison systems – both civilian and military – are turning into resorts. Taxpayers are paying for everything from flat screen TVs to computers to entertain the inmates. They already get better health care than most Americans do.

My wife worked in oncology for years and frequently saw prisoners (from Pelican Bay – home of the worst killers in California) get treatment (guards brought them) even if it meant canceling a civilian appointment! That’s a fact. Not heresy, or something I read. By the time the state was done paying for the two guards that had to accompany the prisoner and his oncology bill, it cost thousands of dollars. They enjoy priority care. That’s the truth.

What have prisoners done to warrant such special treatment? Nothing. They’re behind bars for a reason. But, in recent years there’s been a movement to make their lives more pleasant. They are rewarded for being thieves, murderers, gang members, sociopaths, and the scum of our society. That’s crazy.

When I read that Bradley Manning, convicted of violating the Espionage Act and other offenses, declared that he was a female and wanted to be treated as such, I had to pause and count to ten! What did that mean? The move raises a host of questions about Manning, about transgender inmates in the U.S. - and about the treatment itself.

Throughout Manning's court-martial for divulging government papers to the website WikiLeaks, the soldier’s gender confusion was a factor used by the defense. I don’t see how being confused about your sex has anything to do with leaking classified Army documents, but they tried.

The “right thing” according to Combs means being cooperative and changing all the rules for his client. And, heaven forbid, if the Army doesn’t see it his way, he threatened do do everything in his power to make sure they are forced to! 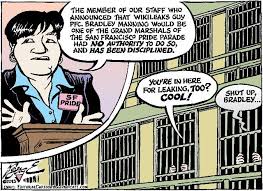 Brace yourself for this little tidbit: the cost ranges widely from $12,000 to $30,000 or more for surgery with ongoing costs of up to $200 a month for hormone therapy and more for psychotherapy! That’s on top of the other normal costs of keeping him behind bars.

Plain fact: if a prisoner receives care while incarcerated, taxpayers foot the bill. And I have a problem with that! When are we going to draw the line when it comes to over-the-top expenses for prisoners so they’re comfortable with their situation?

Meanwhile, I’ll be curious to see if Manning is rewarded for his crimes by getting a free sex-change while he’s locked up.

As It Stands, I wonder if they’ll throw in a boob job if his lawyer wins the case?