The GOP & The Tea Party: Not a match made in heaven! 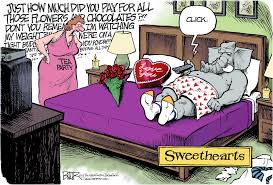 Well here we are in the dog days of summer and both political parties are stumbling along like lame horses.

The GOP has been able to successfully pursue their fascist legislative agenda at the state levels (see North Carolina and Texas) and are raising tons of money for campaigning.

But their internal struggle with the Tea Party continues to leave the GOP languishing in a non-productive ideological limbo. They just can’t get along.

This summer has highlighted both the Tea Party’s re-emergence inside the GOP, as well as the Huge divides within the party. Think immigration reform, the “defund Obamacare” movement, John Boehner’s struggles to corral his GOP colleagues, Mitch McConnell’s primary challenge. Nine months after the GOP’s losses in the 2012 election, there’s still a clear fight going on over the heart and soul of the Republican Party.

Here’s the kicker; this establishment-vs.-non-establishment fight will play out over the next couple of years. The Republican Party meanwhile will continue to loose credibility without a central unified message. Divided, they’re falling. It’s safe to say they’re not a match made in heaven, and have their demons to deal with.

But we’ve also seen reminders over the last 24 to 48 hours about the Tea Party’s limits within the GOP. For instance, the movement to defund Obamacare has gone nowhere, even as Sen. Ted Cruz (R-TX) has exhorted his colleagues not to blink in the fight. What’s more, Cruz decided to renounce his Canadian citizenship after it was revealed he has dual citizenship.

Tea Partier Joe Carr, who’s challenging Sen. Lamar Alexander (R-TN), misspelled the word “Senate” on his website. And McConnell released a new ad highlighting that primary opponent Matt Bevin had once incorrectly suggested he graduated from MIT (when he didn’t). As some establishment Republicans have gleefully noted to many over the last few days, it hasn’t been the best of times for the Tea Party.