Catching asteroids is NOT as Important as Rebuilding America’s Infrastructure!

I don’t have a problem with NASA. If they want to continue to seek the stars on Uncle Sam’s ticket, so be it. But where do we draw the line at stupid missions?

I have to admit catching asteroids – like space cowboys – is an alluring image. Yahoo! Space, the final frontier…and all that jazz.

But when it comes down to allocating our taxes to various government and private projects, we can’t afford to prioritize space travel over life here on the planet – as in our country, which has a crumbling infrastructure! Our travel goals ought to be expanding and repairing our highways, not out chasing asteroids.

Say I’m not a dreamer, if you want. That I lack imagination and appreciation for space travel. I don’t care. I’ve always been a realist – not always a popular position to take. The fact is every one of our 50 states have highways going to hell!

Either we pay now to fix America’s crumbling infrastructure, or we pay more later. 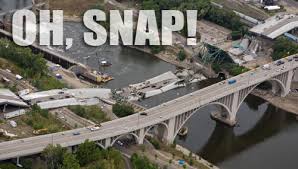 We all drive on bridges, overpasses, and viaducts that we assume must be safe because, surely, somebody inspected them and determined that they are safe. We pay taxes so somebody makes sure the bridges and roads are safe, right?

That trust is badly misplaced. For decades, we have been using up our infrastructure faster than we have been replacing it.

Here’s the status of NASA’s plan to catch asteroids:

“One of NASA's most audacious plans for the future is a mission to capture an asteroid and tug it back near Earth within the reach of astronaut explorers. This proposal is illustrated in captivating new detail in a series of images and video released by NASA Thursday.

The new asteroid mission concept photos from NASA show how the plan would play out in detail. For example, the animations show how a robotic spacecraft could initially lasso in the asteroid and contain it within a giant "asteroid capture bag."

The mission is part of NASA's goal to find and study the space rocks near Earth, including those that may pose an impact danger to our planet. The plan was outlined under President Barack Obama's 2014 budget request.

In this conceptual image, the two-person crew uses a translation boom to travel from the Orion spacecraft to the captured asteroid during a spacewalk.” Read story here