This just isn’t good! Attack of the African Land Snails in South Florida! 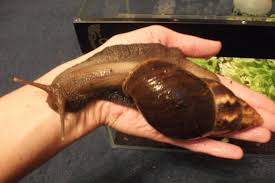 Today’s topic is about South Florida’s growing infestation of one of the world's most destructive invasive species: the giant African land snail, which can grow as big as a rat and gnaw through stucco and plaster. Not a pretty picture.

Residents will soon likely begin encountering them more often, crunching them underfoot as the snails emerge from underground hibernation at the start of the state's rainy season in just seven weeks. The snails attack "over 500 known species of plants.

The snails' saga is something of a sequel to the Florida horror show of exotic species invasions, including the well-known infestation of giant Burmese pythons, which became established in the Everglades in 2000. There is a long list of destructive non-native species that thrive in the state's moist, subtropical climate.

Experts gathered last week in Gainesville, Florida, for a Giant African Land Snail Science Symposium, to seek the best ways to eradicate the mollusks, including use of a 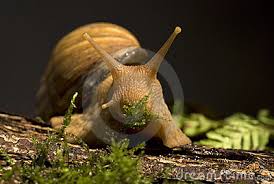 Investigators were trying to trace the snail infestation source. One possibility being examined is a Miami Santeria group, a religion with West African and Caribbean roots, which was found in 2010 to be using the large snails in its rituals.

The last known Florida invasion of the giant mollusks occurred in 1966, when a boy returning to Miami from a vacation in Hawaii brought back three of them, possibly in his jacket pockets. His grandmother eventually released the snails into her garden where the population grew in seven years to 17,000 snails. The state spent $1 million and 10 years eradicating them. (Condensed from U.S.News)