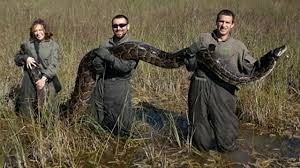 Today’s topic is snakes. Big Snakes. Burmese pythons. They’re invading Florida and the folks there have been trying to raise awareness about it.

They're an invasive species that transcend being the top predator in an ecosystem and take it to another level – more like an aliens in a world with no defense against them. They can grow to enormous lengths and there’s nothing in the Everglades that can kill them. I’ve got a hunch there’s going to be a lot of organized snake hunts in the future:

“After all the hoopla and news of people buying tools to catch Burmese pythons invading Florida, the state's month long hunt for them is over. Hunters caught 68 pythons. That's right, 68, according

to The Associated Press, even though 1,600 people signed up with the Florida Fish and Wildlife Commission to search for them.

Well, the whole point isn't really to kill thousands of snakes, although it's estimated there could be as many as 150,000 of them slithering about in the Florida underbrush. The point is to raise public awareness, according to Professor Frank Mazziotti of the University of Florida, who told NPR's Talk of the Nation that many pythons were former pets whose owners released them.” Read the rest here