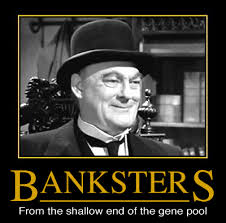 Perhaps it’s just the season, but when I think of corrupt bankers I recall with fond loathing Mr. Potter in “It’s a Wonderful Life.”

Of course these days we have no shortage of corrupt money-grubbing bankers who get away with massive amounts of people’s money without fear of recourse.

When was the last time you saw the head of Bank of America arrested? Or Citbank? AIG? Yet they all have ripped Americans off to the tune of billions of dollars.

They launder funds, get caught, pay penalties, and go their merry way. No accountability because they are too rich! that’s the bottom line. Do you disagree with me? Read the following article, and if you want, make a comment at the end of it in the space provided.

“There’s a reason top executives haven’t gone to jail for engineering the worst financial crisis since the Great Depression. Some bankers are just too big to convict.

The latest example came Tuesday with British global banking giant HSBC’s agreement to pay a record $1.9 billion – about six weeks’ worth of the bank’s profits - to settle money-laundering charges with U.S. prosecutors. The deal ends a three-year probe into accusations of a widespread, multi-year string of illegal transactions violating sanctions against Iran and Latin American drug lords.

Five years after a wave of risky mortgage bets cratered the banking system and sent the global economy into recession, the banking industry’s players have paid or agreed to pay billions of dollars fines and restitution. But not a single senior executive from the biggest banks has gone to jail.

“That’s what has everyone so frustrated .... We’re on the back end of this crisis and there have not been meaningful prosecutions of individuals," said Boston University law professor Cornelius Hurley, who heads the Morin Center for Banking and Financial Law.

HSBC negotiated a five-year deferred prosecution agreement with the government, under which charges will be dropped if it prevents future violations.

The government said the bank "accepted responsibility for its criminal conduct and that of its employees."

"We accept responsibility for our past mistakes," he said. "We have said we are profoundly sorry for them, and we do so again. The HSBC of today is a fundamentally different organization from the one that made those mistakes."

To be sure, the government has churned out a string of cases stemming from the 2008 financial crisis. As of November, the Securities and Exchange Commission had brought charges against 133 companies and individuals, including 60 CEOs, CFOs, and other corporate officers. Those SEC cases have netted the government $2.6 billion in fines, penalties and other payments.

But critics of the government’s response to the 2008 meltdown argue that the best way to prevent the next crisis is to make sure those responsible are held personally accountable.

"Deterring future crimes can't be accomplished simply through fines or negotiated financial settlements -- which many banks regard as the cost of doing business," Phil Angelides, who chaired the government commission that investigated the financial crisis, wrote in a September op-ed in Politico. "Senior executives need to know that if they violate the law, there will be real consequences."

There’s no one single reason for the dearth of high-profile criminal convictions. Some prosecutors have argued that, in some cases, the crimes related to the financial meltdown of 2008 were too complex to pin on individuals. In others, they argued, the law had not kept up with the complex financial engineering that brought about the crisis.

“Virtually every white-collar criminal case is difficult (to make)," said Andrew Stoltmann, a Chicago attorney who specializes in securities fraud cases. “But look at the savings and loan crisis, where 1,000 bankers ended up going to prison with the same sort of legal hurdles that we have in the 2008 subprime meltdown.”

Critics like Stoltmann also fault the Securities and Exchange Commission, which was badly underfunded and understaffed as the financial system expanded rapidly over the past decade. He argues that the commission is outgunned against the well-funded legal defenses of the finance industry’s biggest players.

“You have inexperienced SEC staffers who are hoping to get jobs with a lot of the law firms that defend these executives,” he said.

A number of high-profile cases may yet produce criminal prosecutions, which can take years to develop in complex financial cases.

“Sometimes it takes a number of years to bring these cases,” Assistant Attorney General Lanny Breuer, who was among those announcing Tuesday's HSBC settlement,  told CBS' "60 Minutes" a year ago. “So I'd say to the American people, they should have confidence that this is a department that's working hard and we're going to keep working hard, so stay tuned."

But the clock is ticking for the government. Many of these cases are approaching a statute of limitations that will insulate bankers from prosecution.

High-profile convictions of the biggest banks face another familiar hurdle. In their settlement with HSBC, prosecutors had to carefully weigh the impact a conviction might have on the world’s third largest bank. A criminal conviction would have dealt a serious -- if not fatal -- blow to one of the critical nodes in the global capital network while Europe’s banking system is on shaky ground.

Five years after the crisis began unfolding, the global banking system is even more vulnerable to banks that are “too big to fail,” after the biggest companies acquired weaker players crippled by the 2008 collapse.

“If you look at the pre- and post-numbers as far as concentration in the financial services industry, it’s way more concentrated than it was in 2007,” said Hurley. “They’re humongous in terms of their threat to the system.”

That threat was supposed to be reduced or eliminated by Dodd-Frank, the sweeping financial regulatory reform package enacted by Congress in 2009. But Hurley says the government has yet to bring big banks to heel.

"Dodd-Frank set up orderly liquidation authority and a financial stability oversight council --  all of this what I call ambient noise," Hurley said. "And it’s not bad to have. But we fooled ourselves into thinking that it solved the problem. Too big to fail is as big a problem or more than it was before the crisis." (Source)