It Just Gets Worse Folks: Poop-Contaminated, Mechanically Tenderized Beef in a Store Near You! 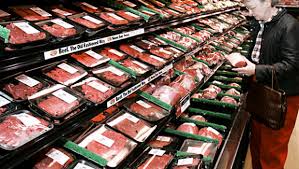 Good Day World!
It’s becoming easier every day for me to understand why my sister Linda became a vegetarian. We both grew up loving hamburgers and steaks. Everyone we knew ate meat. There were no stories about poop in our meat. Now, after reading the following article with disgust and a touch of loathing, I’m questioning myself if I ought to follow in Linda’s footsteps?
I’m getting real tired reading about bad things consistently showing up in our food chain – in particular our meat supply. I’m just going to have to be more careful where I get my meat at, and where I go out to eat. I know. There’s no real safeguard unless I just quit eating meat.
It goes against everything I’ve ever known/eaten to give up cold turkey (pun intended) and become the Veggie Man. What next? My wife’s apple pie? Oh well, I’m passing on this disgusting information because I think you should be aware there’s a good chance you ate shit lately!
“Why is a rare steak and its barely warm center safe to eat? Bacteria like E. coli live only on the meat's surface, so they're easily dispatched with a sizzle in the frying pan—that is, unless your steak has been poked with dozens of tiny little blades or needles that pushed bacteria deep into the meat.
The process is called mechanical tenderization, and more than 90 percent of beef producers do it. The blades cut throughmuscle fibers and connective tissue to make the beef less tough. (Dry aging a steak does the same thing through a chemical process, but it takes a lot longer.)
In the past decade or so, mechanically tenderized steaks have been responsible for at least eight recalls and sickened 100 people. A year-long investigation by the Kansas City Starreveals just how pervasive and unregulated this process is.
Food safety advocates want mechnically tenderized meat labeled so restaurants and home cooks know to cook their beef to higher temperatures. It's the same logic behind thehealth department recommendation that ground beef be cooked hotter (160 F) than intact cuts (145 F). Even that, however, may not be enough. A study published in the Journal of Food Protection last year found surviving bacteria that hang out in "cold spots" on mechnically tenderized steaks cooked to an internal temperature of 160 F.
Lack of labeling is just one example of the greater problem of lax oversight at meat plants. As the Star reports, the federal government's meat inspection program, called Hazard Analysis and Critical Control Points or HACCP, has been sarcastically referred to as "Have a Cup of Coffee and Pray" or "Hardly Anyone Comprehends Current Policy." Meat producers, rather than the government, are responsible for implementing HACCP.
When federal investigators did inspect meat plants, they found plenty of the source for E. colion beef: poop. Inspection reports obtained by the Star through FOIA requests included hundreds of references to feces. Choice quotes include "massive fecal contamination" and "a piece of trimmed fat approximately 14 inches long with feces the length of it."
he Star crunched the numbers and found that bigger meat plants had higher rates of positiveE. coli tests. Big meat factories, which mix beef from many different sources, also spread contamination wider and make tracing the source of outbreaks more difficult. That's of little help to people who became sick or even died from eating mechnically tenderized beef.”(Source)
Read more of the investigation at the Kansas City Star.
Time for me to walk on down the road…
at December 13, 2012