Just so you know: Hoarding gets new diagnosis in psychiatric diagnosis guide 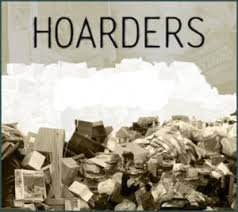 Sometimes there’s a fine line between collecting and hoarding. I’ve collected LA Laker memorabilia for many years but I don’t dye my hair purple-and-gold and insist on eating on official Laker plates with matching silverware.

When someone crosses that fine line it’s usually very apparent. They suffer from an altered reality that becomes debilitating in time. Slaves of saving anything. The top shrinks in our society have recently decided that a “hoarding disorder” should not be confused with people who have obsessive-compulsive behaviors.

The two conditions seem to be identical to me, but you know how these psych’s like to keep refining problems until they can announce a new disorder. I think it gives them a certain satisfaction and at the same time it’s proof that they are doing something…anything for their money.

“Reality TV has brought national attention to hoarding, and now a recent change in the influential psychiatric diagnosis guide may actually bring help for millions of Americans suffering from the isolating condition. 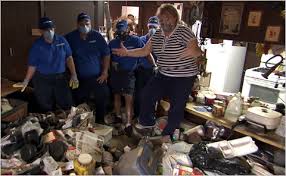 Hoarding – a psychological condition that can result in homes crammed floor to ceiling with papers, junk mail, books, clothing and other “valuables”-- has been associated with obsessive-compulsive behavior, although experts have long held that the two disorders aren’t necessarily connected.

In the revised, fifth edition of the American Psychiatric Association's Diagnostic and Statistical Manual of Mental Disorders (DSM-5), "hoarding disorder" becomes a separate diagnosis, characterized by a "persistent difficulty discarding or parting with possessions, regardless of their actual value."

The revised diagnosis should “result in more people having access to treatment," says Randy Frost, a professor of psychology at who specializes in hoarding issues. "Right now, there are very few clinicians who know how to treat it. Once it shows up in DSM, there will be much more pressure on clinicians to train in how to treat this problem."

Hoarding isn’t just a messy garage or packed closet. According to the APA, it's defined by its harmful effects -- emotional, physical, social, financial and even legal -- both on the hoarder and the hoarder's family members. 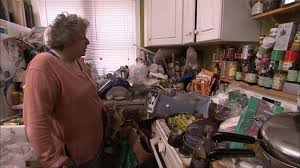 Hoarding is “a disorder that involves the living areas of the home being so cluttered they can't be used for their intended purpose,” says Frost, co-author of Stuff: Compulsive Hoarding and the Meaning of Things.

Set to publish in May, the DSM is a guide doctors use to diagnose mental disorders. DSM codes are also used for insurance reimbursements and certain research grants.

Rachel Kramer Bussel, a 37-year-old writer and editor from Brooklyn, says she's long had hoarding tendencies, although she only recently came clean about them in an essay on Salon.com, a difficult step considering the stigma surrounding the disorder.

"I think people's only reference point is reality TV," says Bussel, who hasn't sought treatment but has worked with a personal organizer. "They think all hoarders are literally crazy cat ladies or people who don't function in the rest of society."

Bussel hoards books, clothing and other items at home; she also carries around at least two stuffed with belongings she says give her "comfort". She says she hopes the new classification will help others become more accepting of the often-misunderstood disorder. 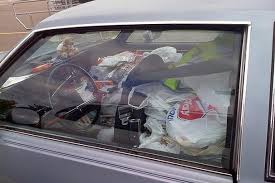 The most common reaction to a hoarding confession is, "'Just get rid of everything. Get a dumpster and throw it all out and then you won't be a hoarder,'" Bussel says.

There’s no hard evidence that hoarding is increasing, although certain societal factors -- such as the abundance of junk mail, our materialistic mindset, and an aging population (getting older increases the chance that a person will experience or loss that contributes to hoarding) -- may translate into more hoarders, says David Kutz, an Albuquerque clinical psychologist specializing in hoarding and OCD.

At least 4 million people in the U.S. would meet full criteria for hoarding, according to Kutz. Other data suggests between 2.5 to 6 percent of the U.S. adult population, or up to a 15 million people, may have hoarding disorder, says Frost, who conducted the first-ever study of hoarding in the U.S. in 1993. “That’s a whopping number," Frost says. 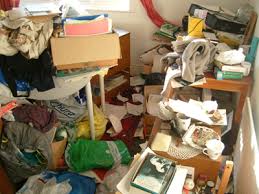 Many hoarders don't recognize the problem. About “90 percent are sent by family members or a city counsel or the local sheriff,” says Kutz, who has appeared on A&E’s “Hoarders” three times.

While experts and hoarders alike say they believe the new DSM classification will help hoarders get better treatment, Frost stresses there is no "magic pill."

"We don't know yet whether there are medications that might be useful for this," he says. "But that's one of the things that will happen now that it's in the DSM. There will be an interest in researching this."

Until then, hoarders can get help overcoming their urge to acquire and save through cognitive behavior therapy and/or peer support groups, a form of treatment that greatly helped Lee Shuer, a 37-year-old mental health worker from Northampton, Mass.

"My mindset has completely changed," says Shuer, who began facilitating hoarding peer support groups after his hoarding habit went into "remission.” "I'm at the point where I can go to places where I used to acquire things - tag sales and thrift shops - and not buy anything. I can come across things that used to make my heart race but they don't turn me on any more. The thrill for excess is gone." (Source)