How Far Will He Go? Is Legalizing Weed Obama's Secret Weapon?

With the race for a repeat in the White House tightening up on President Obama, he’s pulling pulling out some nasty ass ads to demonize Romney.

But I think he and his staff knows that it’s going to take something dramatic to get that younger vote again. He’s disappointed a lot of people by not keeping some key campaign pledges the first time around.

One of those broken promises was his reversal on medical marijuana rights. States rights are being violated daily because Obama’s boys are playing dirty with legal dispensaries in spite of the fact the dispensaries are in state and county compliance. Here’s an interesting article from the Atlantic Wire on the subject: 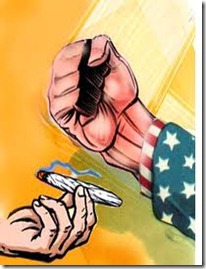 “In 2004 George W. Bush's re-election campaign worked to put anti-gay marriage ballot initiatives up for vote in several swing states in order to turn out more hard-core conservatives to the polls. This year the question is whether marijuana legalization measures will turn out young voters for Obama.

Bush's plan to use gay marriage bans -- in states that did not actually allow gay marriage -- as a turnout booster led to signs featuring icky public restroom symbols proliferated and liberal panic that the Christian right had taken over. The press obsessed over "values voters." One of Bush's aides, Ken Mehlman, who later came out as gay himself, has apologized for the strategy, two others say it didn't work.

This year there's another incumbent president with modest approval ratings who could turn out his base with controversial ballot measures. But

this time, the issue features no biblical or scatological imagery. In 2012, voters in swing states will decide whether they'll allow their fellow citizens to bear joints. Unlike the gay marriage votes, there's no indication that Obama's re-election team is behind any of the pot legalization initiatives, but there are Democrats who are hoping that it will boost turnout among weed's biggest fans: young people.

Getting more young people to vote has long been a Democratic fantasy, since they tend to vote so heavily Democratic. But past attempts to bong the vote have been disappointing, in part because stoners aren't the group anyone would most count on to bother filling out a ballot. Ahead of the 2010 midterms, The Wall Street Journal ran the story, "Democrats Look to Cultivate Pot Vote in 2012," noting that California's pot-legalizing Proposition 19 was being studied to see if similar measu res "could energize young, liberal voters in swing states for the 2012 presidential election."

But exit polls that year showed no spike in young voter turnout, and marijuana legalization was the top issue for just 1 in 10 voters, the Los Angeles Times reported. (Also: Californians ended up voting down Prop. 19.) Still, there were hopeful signs: 64 percent of voters 18-to-24 supported it, and 52 percent of voters 25-to-29 did. In March, the pro-legalization site Just Say Now suggested that the presidential election will draw more young people to the polls, and they'll vote for pot legalization while they're there. (Read the whole story here)