No End To Soaring Beef Prices Seen: Consumers Are Turning To Other Alternatives 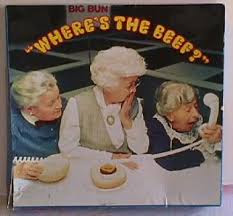 It won’t be long before people will be saying “Where’s the beef?” in grocery stores and fast food restaurants, as rising prices start taking it off the restaurant menus and grocery stores.

Consumers are turning to pork, chicken, and other options to beef. I’m not sure that’s a bad thing however.

From what I’ve been reading in the last decade, beef has been under assault for things like steroids in it and lapses in the industry safety net resulting in diseases like e-coli happening too often.

I also think there’s more Americans eating less beef, not just because it’s expensive, but out of safety concerns and a growing vegetarian trend in the middle class. I actually know people who quit eating hamburger after the “pink slime” controversy came to light. I admit to being a bit queasy about hamburger meat myself. So here’s what’s happening according to the experts:

“Mealtime choices are changing across America, a country that has raised generations on red meat and potatoes. The beef is disappearing.
Americans are eating less beef, and the size of the cattle herd has fallen to its smallest since 1952. Beef prices are rising, and fast-food chains and other companies are worried about increasing materials costs.
Beef consumption has fallen for six years straight, Bloomberg reports.

There are a number of reasons, including the "pink slime" controversy over treated meat. Americans are also more concerned about their health. And beef has become very expensive - ground beef hit an average of $3.02 a pound in March, the highest since 1984.

The Livestock Marketing Information Center predicts record beef prices this year, Bloomberg reports. We could see those higher costs at stores and at restaurants.
The main reason beef prices are climbing is that there are fewer cows - only 90.77 million head at the beginning of this year, a decline of 2.1% from the year before, Bloomberg reports. Drought across America has forced farmers to keep herds low.

Don't expect many changes, either. The U.S. Department of Agriculture forecasts beef stocks to decline further in 2013, though beef imports may rise slightly to help meet the shortage.
These higher prices are weighing heavily on the minds of executives at fast-food companies and grocery stores. Costco (COST -1.21%) said it's dealing with rising beef prices this year, Bloomberg reports. Wendy's (WEN -0.90%) and McDonald's (MCD +0.53%) are feeling the pain as well.

The result? America will continue to move away from beef to pork, chicken and other options. Prices are simply getting too high. A juicy steak will become an indulgence, a treat that we can't afford too often.”