Help sought to solve Civil War mystery – Who were the two little girls?

I’ve always been a history buff, and in particular have been fascinated with the Civil War.

I have relatives that fought for both sides coming from Connecticut, Kentucky, Ohio, Pennsylvania, and Virginia.

I never tire of hearing new stories about those tumultuous times, and the people who lived in them.

I recently read that The Museum of the Confederacy is publicly releasing eight images recovered on battlefields of unidentified persons. Curators are hoping that by some remote chance a descendant might recognize a facial resemblance or make a connection the battlefields where the photos were found.

“The names of the two little girls are an enduring mystery, their images found among crumpled bodies on Civil War battlefields. Each is posed primly on chairs, ringlets cascading past the rouged cheeks of one, the other dressed in a frilly hoop dress. But no one knows the identities of the girls in the photographs, or the stories they might tell.

The photograph of one girl was found between the bodies of two soldiers - one Union, one Confederate, at Port Republic, Va., 150 years ago this June. The other was retrieved from a slain Union soldier's haversack in 1865 on a Virginia farm field days before a half-decade of blood-letting would end with a surrender signed not far away at Appomattox.

Though photography was in its infancy when the war broke out, its use was widespread. Many soldiers carried photographs of loved ones into battle and for the first time, photographic images of war were available - and the Museum of the Confederacy has its own vast collection of images today, many of them identified.

But now museum officials are releasing the unidentified images of the two girls, along with six other enigmatic photographs, on the admittedly remote chance someone might recognize a familial resemblance or make a connection to a battlefield where they were found. There is no writing on the backs of these photographs. No notes tucked inside their wallet-sized frames. For a museum that prides itself on knowing the provenance of its holdings, the photographs offer few clues.

"We don't know who they are and the people who picked them up did not know who they were," said Ann Drury Wellford, curator of 6,000 Civil War images at the Richmond museum that has the largest collection of artifacts of the Confederate states, civilian and military. "They evoke an utter and complete sentimentality."

Museum officials can only speculate on the children and adults, including soldiers, shown in the photographs. But whether they were sons and daughters, fathers and mothers, or siblings the prospect of identifying each grows dimmer with the passage of time.

Typically they were found by another soldier and handed down through generations. Ultimately an attic would be cleared or a trunk would be emptied and the photo would be given to the museum. Some have been in the museum's possession for 60 years or more.

Photography was evolving from daguerreotype to ambrotypes and other mediums in which images were produced through a wet emulsion on glass and were more accessible to a wider audience.

"It had more versatility than it had ever had," according to Jeffrey Ruggles, a historian of photography. "It was the early blossoming of photography. The war just happened to hit at a time when people were very interested in seeing these pictures."

Bob Zeller, president of The Center for Civil War Photography, said soldiers carrying photographs of wives, children and other loved ones off to battle was common. Finding a photo on the battlefield without a clear connection to a dead soldier was uncommon and highly evocative.

"Much of it is the unknown factor that the image carries," he said. "It's something that everyone cherishes, a photograph of their loved ones, but there it is out on this battlefield with these seemingly nameless, faceless corpses."

Zeller, the author of several books on Civil War photography, including "The Blue and Gray in Black and White: A History of Civil War Photography," described such photos as the link for many Civil War combatants to "a reality that, for many of them, had just disappeared."

Sometimes, the story behind an unidentified photo is eventually told. Zeller relates the story of a Union soldier who died at Gettysburg, clutching a photograph of his family. Widespread efforts in the North to identify the family ultimately proved successful in tracing his family to upstate New York.

As for the girl's photos, there is no hint of who these subjects are and the connection to the combatants who once cherished them is lost.

Unlike modern soldiers, few Civil War troops had the modern-day version of dog tags and few carried identification. The Civil War also did not have the kinds of mortuary units that now strive to collect all the possessions of the war dead and return them to their families.

Each photograph is in a hinged case with a leather or composite exterior. The cases protected the fragile images, which include early photographic processes such as tintypes and daguerreotypes.

"We're very fortunate that we know where they came from and how they were found, and many people who donated them were hopeful a family member would see them and identify them," Wellford explained. But the museum official said it would be too costly and time-consuming, she said, for curators to do their own detective work.

Pvt. Thomas W. Timberlake of the 2nd Virginia Infantry found the portrait of the girl with the ringlets and hand-colored pink cheeks on the battlefield of Port Republic between the bodies of the two dead soldiers.

The other girl, who had short hair parted down the middle, was found by Pvt. Heartwell Kincaid Adams of the 3rd Virginia Cavalry in the haversack he found on a Union soldier's body at the battle of High Bridge in Virginia, only days before the war ended at Appomattox in 1865.

"I think they're utterly compelling, especially the little girls," Wellford said. "You can see that they're dressed well and they're posed in elaborate studios. There was a lot of thought and effort that went into taking those pictures."

The other photographs released by the museum offer scant information on their origin. Many lack the dates they were found and locations, but Wellford hopes the public at large could help. 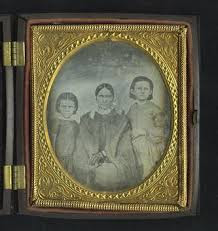 Wellford said the photographs show there was more to the war than combat and death. "You have these guys out their killing each other and all sorts of bloodshed and he's carrying a picture of a little girl," Welllford said. "It shows the humanity."

Museum officials said, even 150 years later, it remains important to return the photos to families who had a link to the Civil War. The two girls, they said, still evoke powerful emotions. "You think about these little girls at home and their daddies never return and they don't know what happened to them," said Sam Craghead, a spokesman for the museum. "It's just a really, really human story." (source)