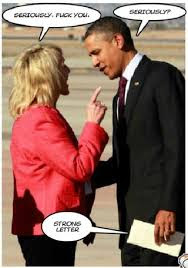 Excuse me! Is Arizona’s governor finally losing whatever sanity she had left?

Gov. Jan Brewer said she won’t release a copy of a letter she so dramatically delivered to President Obama on Wednesday. One of her lackeys told the press it was a "personal, handwritten" correspondence and no one in her administration has a copy of it.

The handling of the letter, considered a public record by experts, raises legal questions about the way the Governor's Office is complying with Arizona's public-records law. Just now? They should have been looking a long time ago.

This letter is a perfect example. According to Dan Barr, a First Amendment attorney who commented on the letter, "Absolutely it's a public record — it's created in her official capacity."

Barr went on to say, “There's nothing remotely personal about this. She presented it to the president of the United States in the most public way possible. The whole reason to hand him this letter in public is for political theater, and then to be asked what was in the letter. I find it incredible to believe there is no copy — and that there is not at least a draft of this letter lying around. My response to that excuse is — is that your story? Really?"

Well, Brewer? Is that your story? Because if it is, it’s so full of holes that it’ll never fly in the real world. It sure must be an interesting letter if your afraid to leave any copies around. Were staffers instructed to eat any hand-written notes left lying around? Just curious.

I hope you don’t think you’ve scored some sort of political victory on behalf of your crazed tea party cronies, by this grandstanding game. And don’t give me any crap about not remembering shaking your finger at the president like he was a bad boy. It went viral just like you intended.

The only thing you proved Brewer, is that you are a political creature always looking out for an opportunity to show your credentials as Alice in Wonderland for the Tea Party set.

Posted by ImBlogCrazy at 3:53 PM