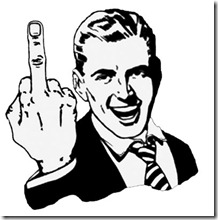 It’s time to sip on the hot beverage of your choice while we leisurely look at today’s stories. I think this trio of tales ought to get you going:

South African President Jacob Zuma's elite guards overstepped their authority when they arrested and roughed up a student who they thought made an obscene hand.

A jeweler's heirs are fighting the United States government for the right to keep a batch of rare and valuable "Double Eagle" $20 coins that date back to the Franklin Roosevelt administration. It's just the latest coin controversy to make headlines.

Philadelphian Joan Langbord and her sons say they found the 10 coins in 2003 in a bank deposit box kept by Langbord's father, Israel Switt, a jeweler who died in 1990. But when they tried to have the haul authenticated by the U.S. Treasury, the feds, um, flipped.

They said the coins were stolen from the U.S. Mint back in 1933, and are the government's property. The Treasury Department seized the coins, and locked them away at Fort Knox. The court battle is set to kick off this week.

LANCASTER, Calif. – The eccentric creator of a Mojave Desert compound of whimsical buildings known as Phonehenge West was jailed Friday for failing to obey an order to cut electricity and keep guests out of the illegal structures.

Mitchell said Fahey's "blatant refusal" to demolish the structures and disconnect electricity put his family, the community and first-responders at risk because the buildings pose a significant fire hazard. The judge had allowed Fahey to remain free pending sentencing on the condition that he follow the order.

"I did not want to put Mr. Fahey in custody. I wanted to work with Mr. Fahey. I gave him an opportunity," Mitchell said. "I don't think he has taken the public risk to heart. He has chosen to do nothing."

The case has turned into something of a fight-the-system cause celebre with more than 29,000 fans of a "Save Phonehenge West" Facebook page.

Are you going to do a follow up article? Would love to know what happens next.