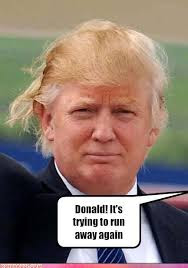 After Obama released his birth certificate today Trump’s response was to gloat that he “was honored’ to see a response to his question. He then turned around and launched into a new attack and questioned the president’s school records. Recognizing his hand was called on the “Birther” insanity today, Trump stopped gloating long enough to became a “Grader.”

I’m sure he’ll be the guiding light for a lot of disillusioned racists who had dearly hoped to keep the birth controversy issue going on forever. But now they can point their pin heads in a new direction and pursue their pastime of discrediting the president in any way possible.

Well, I want to see “Ferret with Mange Hair’s” obedience school transcripts for the ferret playing dead on his head (see photo)!

Following Trump's analysis, how did George W. get into Harvard and Yale? Where are his records? How did Gerald Ford get into Michigan? How did Reagan get into anything above the 9th grade? We demand to see those records. Then, we want to see how Trump got into Penn, as well as his transcripts.

Let’s get one thing straight: Trump is an ego-driven narcissistic douchebag whose been pumping up the ratings on his silly-assed reality show and news organizations like MSNBC and Fox have happily carried his rantings for ratings. The clown even said he'd announce his intentions about running for president on the season finale!

When the “Grader” crap subsides, as it will, I expect Trump will come up with something equally ridiculous to get the public’s attention.

As It Stands, I can see it now: “F*cking magnets, how do they work?"

For Trump to have as much exposure as he is getting only shows how desperate the American people really are for a "phoenix" to rise from the ashes of the Red/Blue/Tea/whatever to lead us to better tomorrows.With the advent of the internet and instant communication comes instant accountability on the part of our so called "public servants." They can't hide. The two party system is dead. IMHO.

I'd love to see the two party system give way to a wide open field!

The problem is those two party's have all the money/corporations backing them...who can fight that?

I agree about how desperate Americans are for a real leader.

In another time, Trump would have been laughed out of the board rooms for even suggesting running for president.