Going back 41 years ago to this same week in April 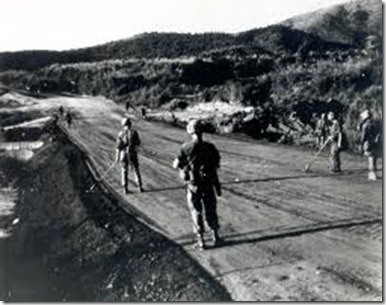 This is a Three-Part Post.                          Part One
By Dave Stancliff
Forty-one years ago this month, this week, I was a combat engineer serving in the Republic of Vietnam. One year earlier, I was a high school student without a care in the world and eager to graduate so that I could get on with life. Be my own boss. You remember what that was like, don’t you?
My squad’s mission was to sweep for mines on a two-lane dirt road laughingly referred to as Highway 22. We would get up at first light and haul our heavy mine-detection equipment out and take a stroll down that reddish dirt road until we finished, usually at noon.
The VC, who watched our every move from hidey holes, enjoyed putting “Bouncing Betty’s” beneath piles of buffalo shit as they knew the odor offended our Western sensibilities. The hoped we’d pass over the putrid piles rather than bother disturbing them. I never saw the trick work, but heard it did somewhere else from guys in other units.
I can tell you that it w 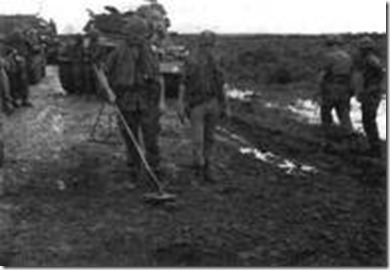 as no fun probing for live bombs with a bayonet in a stinky mess. I got use to it however, as I got use to everything in that alien world somewhere in the Central Highlands that spring. How I managed remains a mystery to me today.

Army units were assigned to provide us security and walked along behind us bristling with weapons as we did our job swinging those heavy mine detectors for hours at a time. Truck and tanks followed us in this daily routine.

We always had close ground-to-air-support. We could call in “Puff” the Magic Dragon, Spooky, Golf Ball, or Spectre, which were a bunch of assorted gunships made from AC-47s, C-123s, and C-130s.
Our security radioman could call those death-dealers in for a strike in a heartbeat. Charlie knew this and made it a habit not to wander around during the day. He just burrowed down into the ground and waited for darkness. Hoping that the mines he set during the night would kill some invaders during the day. Sometimes I imagined the enemy’s eyes following me. Patiently watching. Hoping to see me become a causality.It was a feeling we all had to get use to. 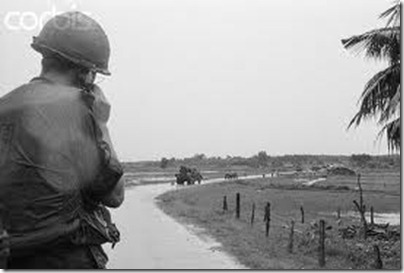 We were on constant alert for the many signs that could mean life or death. I found an old French anti-tank mine one day. Took off my earphones and handed my mine detector to my sergeant. I found it and that meant it was mine. The earth stopped as I carefully probed the spot and slowly traced around the perimeter of the pressure plate. Time was meaningless. Sweat poured off my brow as I strained to recognize what kind of mine I’d uncovered.
I recognized it even as the sergeant said “French make.” That meant it would take at least 500 pounds on the pressure plate to set it off. Excellent for mangling vehicles like American trucks. Once I disabled it I sat down and drank some water from my canteen. I felt like throwing up, but the sensation passed.

See Part Two – Thursday, April 27 - “The Montagnards were our allies.”

I have the uneasy feeling that if I had gone over there, I would have come home alive. A few of my friends didn't. All I can do is thank those of you who did, and know that not everyone came home whole physically or mentally.

I can't really say what was accomplished in Viet Nam, but I know that the world is a better place because of soldiers, you can take great pride in having been one.