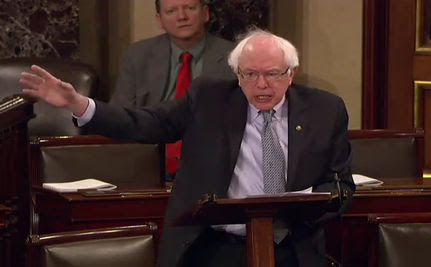 While you’re making out your taxes due April 15th, corporate America is laughing all the way to the bank!

Despite the Supreme Court 's finding that corporations are basically people in the eyes of the law, corporations themselves cannot be moral or immoral -- they are entities, not sentient beings. We have a system that rewards the gamers, where winners take all, and influence peddling is rife; where the defense for a highly profitable company not paying taxes is that it is within the law.

“Despite complaints about the U.S.'s burdensome 35% corporate tax rate, two-thirds of American corporations pay no taxes in a given year. In a speech last week on the Senate floor, Senator Bernie Sanders (pictured here) (I) of Vermont called out the top 10 corporate tax avoiders:

Among those actually getting money back from the Feds:

Wall Street made the list as well; the Senator's office notes,"Goldman Sachs in 2008 only paid 1.1 percent of its income in taxes even though it earned a profit of $2.3 billion and received an almost $800 billion from the Federal Reserve and U.S. Treasury Department." Full Story.
Posted by ImBlogCrazy at 4:37 PM