If the clowns go what would a government shutdown look like? 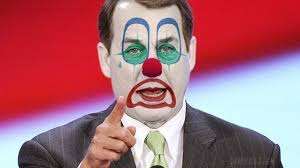 Forget “Bring on the Clowns,” because the new version for that old phrase is “Watch the Clowns Do Nothing!” in 2011.

Based upon past shutdowns (1995-1996), here’s what we can expect if our dysfunctional government decides to shut down:

First off, forget about going to the National Zoo in Washington. It’ll won’t be open. I hope you don’t plan on going to any national parks when our polarized politicians are playing their games, because they won’t be open.

If you have a refund coming from The Internal Revenue Service, you’re going to have to wait a while because they could stop issuing refund checks.

How serious are these Republican and Democratic morons about going through with their tantrum? Today, “nonessential employees” were told to “..turn off their BlackBerrys during a shutdown, or risk punishment for working while on furlough.”

The Smithsonian Institution has a sign ready: “Closed for government shutdown.” Just think how thrilled  tourists will be when they arrive this spring and find that out. That’s not going to be pretty! It would be nice if they could give fair warning to the public, but guess what? No one knows when the “Bad Day” will arrive, or how long the shutdown will be.

No cleanup work was done at toxic waste sites during the last two shutdowns because contractors could not be paid and Environmental Protection Agency officials could not monitor cleanup work. No reason not to think the same thing will happen again.

As It Stands, if the clowns are no longer funny, then it’s time for a whole new show. Sweep ‘em all out and start over!

Here’s an article on this subject from today’s headlines: