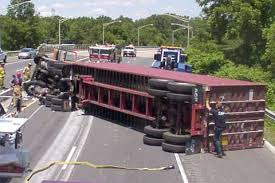 I’m reminded of the bad old days when I lived down in the Palm Springs area and had to drive on Interstate 10 every day. If it wasn’t dust storms, it was the high winds! Then there was the sheer volume of traffic…agghhhhh…I don’t know how I handled it for so long. Now I live in paradise (as far as I’m concerned).

Those dreaded and powerful Santa Ana winds were causing major problems in the Inland Empire on this morning, toppling big rigs and causing officials to close a portion of two freeways.
The California Highway Patrol reported that lanes of the Interstate 15 at Interstate 10 were closed because of overturned trucks. Story Here.