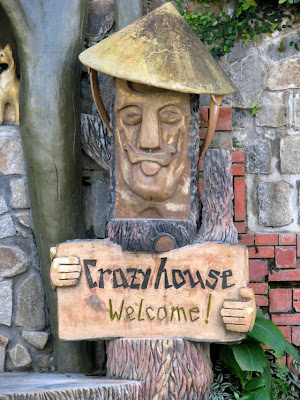 Hang Nga Guesthouse and Gallery in Dalat, Vietnam is better known as The Crazy House and it’s not hard to see why.

The base of the guesthouse was built to resemble a giant tree, but more of a scary horror movie tree than a friendly fairyland tree.

The whole structure is riddled with unexpected twists and turns, rooms where one least expects them, organically shaped windows, and animals. Stone animals, that is, like bears, giraffes, and spiders.
Built in 1990 by a woman named Dang Viet Nga (the daughter of a former president of Vietnam), The Crazy House immediately began attracting attention. 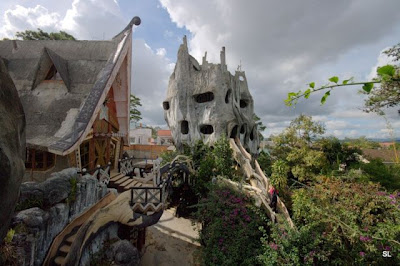 She saw an opportunity, and opened the house to the public, who’d happily pay a small fee to gawk at the house’s statues and pools and oddly-shaped rooms.

Go here to see more photos – inside and out.

Posted by ImBlogCrazy at 2:22 PM

or as we like to call it: The Jane Fonda Hilton

No proble. By the way - she was known as "Hanoi Jane" too where she took photos with NVA toops.