Fox News: Threats against Democrats are wrong, but ...

I can’t begin to describe how disgusted I am with the Republican Party, and the wing nuts who are threatening legislators. There’s NO EXCUSE for threatening violence. I don’t give a damn what kind of spin Fox and others try to put it…this shit has to stop or the polarization will lead to the destruction of this nation. It’s that simple. If it were the Democrats, I’d say the same thing. This time it isn’t. The Republican Party needs to get it’s act together or all their creditability (what’s left to the party) is going to disappear forever. They can start by listening to their leaders, and not TALK SHOW hosts who inflame viewers for ratings!

Amid reports that several Democrats in Congress have been the targets of death threats, racial and anti-gay epithets, and have had their offices vandalized for their votes on health care reform, several Fox News personalities have been quick to first condemn the threats but then immediately make excuses for the threats. Others have appeared to dismiss the seriousness of the threats.

Fox & Friends airs viewer emails comparing threats against Democrats to American Revolution, William Ayers. After Carlson said, "The most important thing is what you think about all of this, because you are the ones that are going to go to the polls eventually," Fox & Friends aired several emails from viewers that condemned the threats but immediately appeared to defend the actions. One email claimed that Democrats are using the threats "to gain sympathy. Like Rahm Emanuel said, 'you never waste a crisis.'" Another read: "[W]hat did they expect when they basically stole from the...American people. What do they think 1776 was about & wasn't there some violence back then?" A third email said: "I don't like violence & it is wrong. Having said that, why should Democrats be surprised? Bill Ayers of the Weather Underground bombed the Pentagon & now he is a 'respected' speaker of the left. Why should Democrats expect anything different?" [Fox & Friends, 3/25/10] Excerpt from the emails: 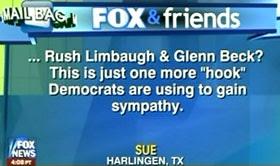 Posted by ImBlogCrazy at 8:05 AM

Funny. The text at the top of your blog claims...

"This is a NO POLITICAL PARTY ZONE. Leave party rhetoric at the door step"

Like pretty much everything else you write, that is obviously just so much bovine fecal matter.

I attack both political parties when they use rhetoric and lies. I think my post states that.

I DON'T BELONG TO A POLITICAL PARTY. However, I have no problem going after politicians because I beliece most are sum.

As far as the rest of the things I write, you're entitled to your opinion. It is a free world, and I don't expect everyone to agree with me. I'd be worried if everyone did.

Like at the whole picture (or in my case my past posts on this blog). You'll see I go after the Democrats too. Lately the Republicians and Conservative groups (as in Tea Baggers) have been inciting violence. So I'm going to comment on it.

AGAIN - all politicans have my scorn and this is what I mean by a NO POLITICAL PARTY ZONE.

I hope that helps you understand.
Thanks for the input.