Another Day in America: Running Dogs and Escaping Cows and Emus 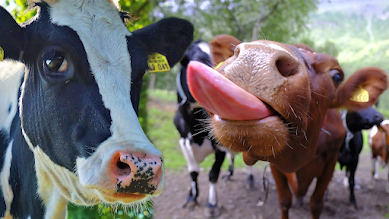 Folks in Utah are talking about a 6-month-old female Merle cattle dog that shut down I-80 as first responders tried to catch the errant pooch.

Thanks to the Utah Department of Transportation cameras captured a video of the exciting chase.

According to the Salt Lake County Animal Services center the dog was not wearing a collar or microchipped. She's going to be held for five days before being put up for adoption.

You may be thinking..."Is this even a news story?" Well, in Utah it is. It used to be if a man bit a dog that was a news story. Not an errant pooch wandering around lost.

It was a spur of the moment opportunity that the bold bovines took when the cattle trailer they were in was involved in a crash.

The Arizonia Department of Transportation responded by sending out workers to corral 30 escapees. The truck had been carrying 109 cows before the crash.

The unorganized attempt for freedom ended fairly quickly as workers responded to the location at the Loop 101 freeway in Glendale.

As of this writing none of the escapees would tell authorities who their leader was. Everyone involved was unharmed.

Two emus made a daring escape from their enclosure according to officials in an Ohio county who managed to catch them this week.

However, the story doesn't end here.

There's a third emu that remains on the loose in the same general area. Officials recently said that an unrelated emu has been free since mid-November.

It's been a mystery since then. Highland County locals have been speculating that the Lone Emu (as he's now called) may have helped (or at least encouraged) the breakout of the other two emus lately.

As it stands, I'll be sure to let you know if they capture the Lone Emu who at this very moment may be looking for more of his people to set free!