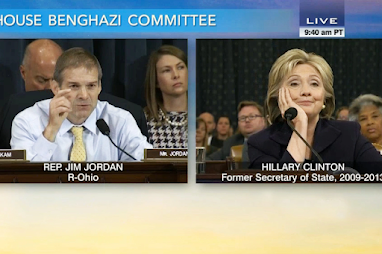 Ever since the Republican Party donned their tin foil hats and went all in on the Benghazi conspiracy, they have been searching for a new boogeyman to replace Hillary Clinton.

After years of pursuing Hillary Clinton - including 12 hours of direct questioning by Jim Jordan's kangaroo court - they were unable to charge her with anything.

The disappointment was palpable among the conspiracy-loving conservatives who spent so much time spreading lies and misinformation only to not see their fever dream come true.

Their vile efforts to besmirch Clinton have been consigned to history's trash heap along with a litany of other conspiracies.

This was untenable for the crazies who still roamed in the halls of Congress. Then along came Hunter Biden, President Biden's son in time for the 2020 election.

With the help of Russian disinformation, the Trump team tried to pull off an October surprise by charging Hunter with tax fraud and worse weeks before the election.

Fortunately, most of the mainstream media didn't just jump on the bandwagon and took time to vet the outrageous charges Trump's minions were bringing without evidence.

Biden won. Trump lost. But of course, it didn't end there.

Hunter Biden is going to see an all-out assault against him by the GOP House in January as part of their much-advertised revenge tour.

The first blow has already come from another alt-right corner as new Twitter owner Elon Musk promoted the leak of Hunter Biden documents.

Substack writer Matt Taibbi released portions of the leak in a rambling Twitter thread on Friday night. For the record, the info was a nothingburger.

Fact: Hunter Biden has been under investigation by a House Committee for two years now with no conclusions drawn. But Gym Jordan has promised to launch a new one in January.

Let's see now. The same Jordan that led the fruitless Benghazi investigation is about to launch another two-year fiasco that will also end up in history's trash heap.

The thing that really amuses me is the GOP thinks the general public cares about a non-public person with tax and health problems.

If they were interested in a president's offspring Trump's kids would have been investigated for their part in Daddy's government looting - and illegal foreign contacts - while president.

The public does care about Trump's tax problems and many celebrated when his taxes were finally given to the House committee last week. It's taken years of obstruction to get to this point.

As it stands, the good news is the public is going to be sick of right-wingers pursuing vendettas and not coming up with any legislation that might benefit them. Can you say Blue Wave?