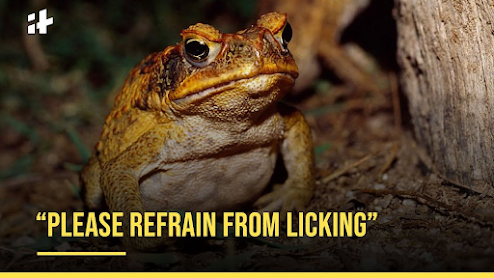 Have you ever heard the fairy tale about a prince that was turned into a frog by an evil magician and could only break the spell if a beautiful princess kissed him?

I got one better than that and it's not a fairy tale.

People are going out into Arizonia's Sonoran Desert and are licking toads! No shit. It's true and the National Park Service has had to resort to putting up signs everywhere imploring tourists not to lick toads, banana slugs, and unfamiliar mushrooms.

What going on there? I've never seen a public sign warning people not to lick toads. Are people that stupid nowadays? You don't have to answer. We both know there are strange and disturbing people among us.

Are the toad lickers hoping to be turned into princes or princesses?

Seriously (for a moment) there are nimrods that have discovered that the toad's toxic secretions contain a powerful hallucinogenic known as 5-MeO-DMT.

Authorities say that in recent years, smoking the toad's secretions has grown in popularity putting the amphibian on the endangered list in New Mexico (one of two states the toads live in.) The Department of Game & Fish says collectors want them for drug use. At least they don't kill them.

I've read reports that public figures have been experimenting with the toad's extracted toxins. Not the brightest bulb in any room, boxing legend Mike Tyson has spoken about using it.

There's potential hope, according to some researchers, that 5-MeO-DMT might offer therapeutic benefits.

I think it's interesting to know that Hunter Biden has written about using 5-MeO-DMT therapy as a form of addiction treatment.

Back to the clods walking through the Sonoran Desert at night (the best time to catch them) searching for toxic toads.

Stop it you clowns!

As it stands, I never thought I would see a sign warning people not to lick animals on public lands. I guess there's a first for everything.