Animal House in the House: Creature Features for Everyone's Entertainment 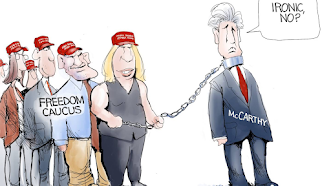 I know democrats are feeling blue right now because the GOP gained control of the House of Representatives during the midterms.

It's not the end of the world. As a matter of fact, it could be the best thing that could happen by driving democratic voters to turn out in record numbers in 2024.

Two years of republicans turning the House into an Animal House is going to motivate millions to vote the democratic ticket.

With MAGA morons becoming committee chairman you can expect a despicable and vile assault against the president of the United States and his son Hunter.

Fox News will gorge on the daily drama of GOP lawmakers on the loose in the House badgering democratic lawmakers.

Investigations into Trump's political rivals will spring up like poisonous toadstools in the congressional committees. Everyone knows the long-awaited Revenge Tour (it's not been a secret) starts in January.

There's a wrinkle in the plan.

Republicans have devolved into an in-house collection of animals that are motivated by different agendas. Maggots' have no agenda beyond revenge for perceived slights.

The (Ironically named) Freedom Caucus will find itself fighting with their colleagues over nearly every issue in the next two years. No political pundit would bet it'll be kumbaya among House republicans.

You can count on those MAGA lawmakers for laughs. From (I don't have to wear a jacket like everyone else) Jim Jordan, to crazy Marjorie Taylor Greene and her Jewish space laser collection, it's going to be entertaining.

I understand it's not going to be easy watching lunatics mangle the Constitution and violate every law in Congress for the next two years.

As it stands, it helps to remember that we have a democrat for president and a democratic Senate to counter some of the madness.