In Case You Wondered: Pooping in Public is Not Covered Under the First Amendment 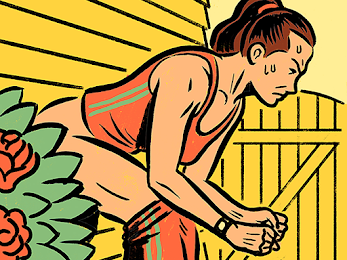 Just about everything these days is covered under the First Amendment but pooping in someone's yard isn't.

I can't imagine the country's founders claiming it's okay to crap where you want to in public places when writing the First Amendment.

What brought the subject up? 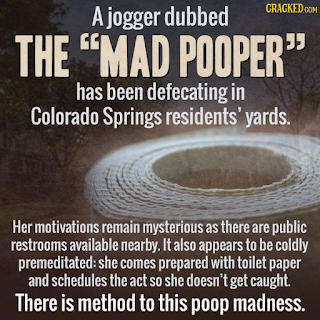 In 2017 a Colorado Springs neighborhood was plagued by a "mad pooper" defecating on their front lawns and sometimes right in front of their children.

From what little authorities have gathered the mad pooper is a woman jogger. Numerous blurry amateur videos that have surfaced on the internet proves that much. To this day she hasn't been caught.

A while back some clown came forward claiming to be the jogger's spokesman. According to him her actions were protected under the First Amendment, and therefore the government cannot control when and where she relieves herself. He actually compared her actions to breastfeeding in public.

Needless to say, authorities weren't playing that game and were intent on finding her and charging her for indecent exposure. 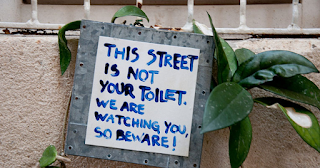 But they have to catch her first.

Apparently, she's not that stupid to trade a year's supply of toilet paper to be registered as a sex offender because there's been no reply.

As for her spokesman, no one has seen him for years. If authorities did interview him after his announcement, no one reported on it. I understand it's still an open case.

Related: Another Mad Pooper in Denver Has Struck - It Was a Man this Time. (2021)

As it stands, there's a neighborhood in Colorado Springs where people are still on the lookout for the return of the mad pooper! Parents use her as a boogeyman who might crap in their kid's room if their bad!