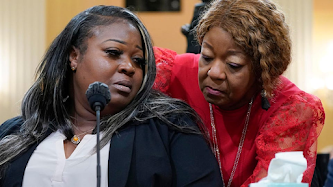 Trump and his minions need to be hauled into the Department of Justice for targeting two American election workers (AP Photo of Wandrea "Shay" Moss and her mother Ruby Freeman) whose lives were put in jeopardy due to a fake ballot scheme in Fulton County, Georgia.

Wandrea "Shaye" Moss and her mother Ruby Freeman had their lives turned upside down when Trump targeted them and encouraged his supporters to pressure them into confessing that they illegally added Biden ballots to the counting machines.

At one point of the continual harassment campaign Moss testified that people pushed their way into her grandmother's house, claiming they were making a citizen's arrest.

Meanwhile the FBI told Ruby Freeman she had to leave her house for an undetermined amount of time because of credible death threats.

There was no fraud as the Republican governor and secretary of state explained to the Jan. 6 committee.

Trump sycophants like Rudy Giuliani traveled around holding quasi "press conferences" accusing the women of cheating for the democrats.

Giuliani and his goons literally launched an all-out attack besmirching their reputation and making the election workers targets for MAGA morons everywhere. No American citizen(s) should be subjected to this kind of life-changing abuse by the nation's commander in chief.

It's shameful. It should also be illegal. But I haven't heard a word about the DOJ looking into their baseless crusade against both women that could have cost them their lives. Not a damn word.

Here's a video of the two women's testimony before the Jan. 6 committee on 6/21.

Moss and Freeman's story is only one example of the wild voting conspiracy theories spread by the Trump campaign. When Trump started showing edited clips of the two women at work and accused them of cheating, he was personally putting them at risk.

An interesting aside: Among the many threats and instances of harassment, a woman claiming to be Kanye West's publicist came to Freeman's house to encourage her to confess to voter fraud.

The connection is clear. It's just another case of Trump committing a crime and routinely getting away with it.

The Canine Arthritis Treatment Market industry is being driven by the growing prevalence of osteoarthritis in dogs. The non-steroidal anti-inflammatory medications (NSAIDs) is one of the most common medications involved in the treatment, as it reduces the pain and inflammation in pets. Over the forecast period, the growing adoption of pets, which includes dogs and cats, is likely to provide impetus to the market. The increasing adoption of pets can be attributed to the rising demand for companionship and enhanced security.