Where Has All the Honor Gone? Long Time Passing 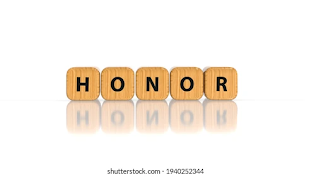 Where have all the soldiers gone, long time passing?

Where have all the soldiers gone, long time ago?

Where have all the soldiers gone?

Gone to graveyards, everyone

Oh, when will they learn?

Oh, when will they ever learn?"

Today I'm not talking about soldiers, but I am embracing the nostalgia behind Seeger's iconic song.

Once people believed in honor

Where has that practice gone? long time passing

Gone to right-wing graveyards, as we look on

When will people learn?

We can only hope honor will return

Looking at the current state of our society becoming increasingly hostile, and the art of communication breaking down, many good traits have fallen to the wayside in the cultural chaos.

Honor is one of those things.

One of the things that trigger me is watching people openly lie when you know they know better. Anti-vaccination activists and politicians - who are often vaccinated and boosted - espouse the dangers of getting the shot. There is no way people like that have any honor.

Greed and power have supplanted facts and honor. There's no guilt when others die after listening to the conspiracy trolls who are laughing all the way to the bank.

Honor no longer seems to matter. Ask Ted Cruz. He lost his five years ago when Trump insulted his wife and grandfather.

A sense of honor is rapidly disappearing in a time when we need it more than ever.