It looks like the ongoing story (nearly a year now) about fake electors is entering a final phase.

The Jan. 6 Select Committee has issued subpoenas for 14 Republicans from seven states who served on bogus slates of Trump electors in 2020 as part of the Trump campaign's scheme to subvert the Electoral College.

The 14 GOP leaders from the states served as "Chair" and "Secretary" of the slates of fake electors designed to be alternates to the duly elected electors. 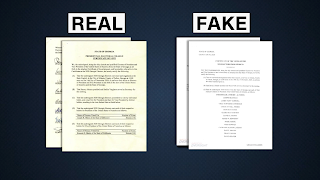 Here's a list of the would-be traitors in all seven states:
--------------------------------------------------
They all have until February 11th to appear for depositions through the month of February.
Among the accusations leveled is that the Trump campaign lined-up supporters to fill the elector slots, secured meeting rooms in statehouses for them to meet on December 14, 2020, and circulated drafts of the fake certificates.
It doesn't look like it's going to be that difficult (with mounds of evidence) to prove there was a coup attempt by these fake electors and the Trump campaign.
It was literally a coup attempt within the coup attempt by the Oath Keepers who have already been indicted with insurrection and sedition.
America needs accountability for the near death of democracy. When the committees' final recommendations get to the Department of Justice it's up to Merrick Garland to see that justice is served.
at January 28, 2022