Oregonian Resident Speaks Out About Never-Ending Protests in Portland 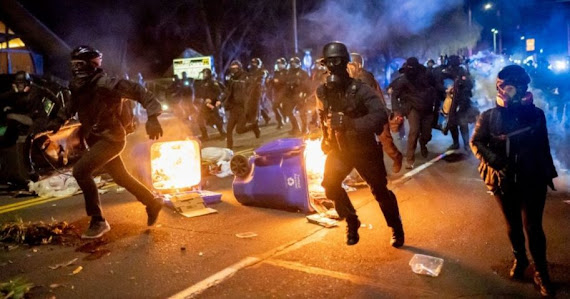 I love living in Oregon, but I wouldn't even consider moving to Portland.

Portland in recent years resembles a third world country with nightly protests over everything you can imagine.

My son and his girlfriend moved up to Portland last year. They're leaving the city in another week with no regrets.

I'm sick of turning on the local and national news and seeing rioters looting and burning in the streets. All I see is anarchy.

It's not that I don't think Americans should protest inequalities in the treatment of African-Americans.

But there's a big difference in the George Floyd protestors, and anarchists. Portland has become the home of anarchists and extremists on both sides of the political spectrum.

Sadly, the city hasn't been able to get a handle on the nightly attacks. I can't understand why. What other city in the nation has the bad reputation that Portland has for regular nightly riots?

I'm all for protesting against police brutality and human rights. As long as the protests are peaceful.

Portland officials appear to have no answers to the problem so local residents have to deal with a never-ending series of protests.

Like I said, Oregon is a great state. Portland however is a text-book example of everything that can go wrong in our society.