Herrera Beutler: GOP Latina Congresswomen Not Afraid to Chart Her Own Course 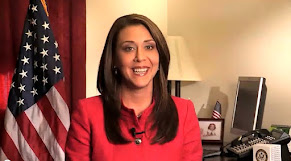 Regardless of party, if a lawmaker stands up for truth and democracy, I respect them.

The one thing that stands out about Herrera Beutler, a Republican Latina member of the House, is she's not afraid to enter uncharted waters to do the right thing.

She's unique for a lot of reasons. She's not a grandstanding puppet pledged to protect Trump despite how corrupt he is.

Trump minions were unable to intimidate her when she voted to impeach Trump the second time around. She, and nine other, "renegade" GOP House members broke from the pack and voted against Trump.

That vote was a moment of truth for Beutler.

It landed her in the GOP leader's office, and incurred the wrath of Trump who promised to campaign against her (and the other nine) when they're up for re-election.

That moment of truth hasn't faded yet, as she continues to be in the limelight for revealing damaging details about Trump's phone call with House Minority Leader Kevin McCarthy during the Jan. 6 assault on the Capitol.

Here's the thing about Beutler; she's spent 12 years in the House steering clear of controversary. She's never been a flamethrower.

However, what little allegiance she gave Trump evaporated after the Big Lie and the Capitol riot.

In doing so she may have become a potential prototype for how to cross Trump and survive in the party. It remains to be seen.

One thing is for sure, she's not afraid to chart her own course and stand up for the Constitution and truth.

In a recent interview with Politico, Beutler was asked, if she lost her seat for standing up for what she believed was right would it be worth her defiance?

Her reply, "If it means making sure our party thrives and continues to defend those ideals that I think are enshrined in the Constitution, then it's worth it. It's so worth it."