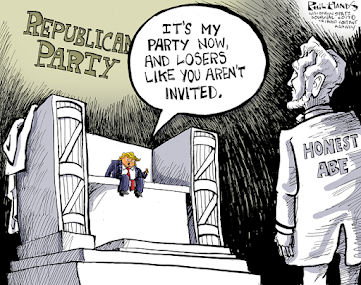 Political pundits say it was fear that forced GOP Senators to vote for acquitting Trump during his second impeachment trial.

But it was more than that

The Republican Party has chosen fiction over fact. Loyalty to country is no longer part of the Republicans message.

Proof of that lies in the response that state GOP parties have had towards their own senators. The brave seven GOP senators who voted to convict Trump are facing a backlash from their own states.

To put this in focus look no further than one state party Republican who attacked GOP Senator Toomey today. His take on Toomey reflects the whole party's attitude;

"We didn't send Toomey to the Senate to vote his conscience or what was supposedly right. He was sent there to further the party's aims. Period."

And there you have it. The soul of the Republican Party is gone, replaced by a cult who believes in power at all cost.

... they're also referring to a party that has gone rogue and is an enemy of democracy.