Congress Must Deal With 'The Enemy Within' 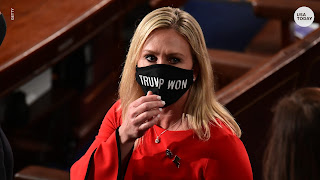 How would you like to work with someone who hates you so much that they've publicly stated it and called for your death?

Members of Congress are now faced with that very threat.

House Minority Leader, Kevin McCarthy, is trying to walk a fine line between allowing one of his members to get away with threatening other members, and the House Speaker, and not taking too drastic measures against Marjorie Taylor Greene - a newcomer to the House.

There's also a sense of fear among many House members who are against other members bringing guns onto the House Floor. They are also concerned for their safety when they leave the Capitol.

Homeland Security and the FBI have issued a rare threat notice to the public, warning against domestic terrorists who follow Trump and are ready to kill for him.

What's the chance that McCarthy will do the right thing and censor (at the very least) Greene? I'd say it's a mute point today as McCarthy is visiting ex-tyrant Trump at his palace in Florida.

McCarthy is at Mar-a-Lago kissing the ring and asking forgiveness for daring to say Trump was responsible days after the coup attempt at the Capitol.

How crazy is Greene? Check this viral video out as she stalks and harasses a student who was at the Parkland School massacre.

If Trump tells him to leave Greene alone, McCarthy will comply like a sheared sheep.

So where does that leave the rest of the members in the House?

If the Republicans are going to shield fanatic's like Green, Democrats are going to have to take more preventive measures to protect themselves.

There's one more reason why I find Green's shocking rhetoric contemptable - she was elected DESPITE her hate-filled rants and association with QAnon. Neither was a secret.

What the hell is the matter with people who support someone whose obviously crazy?