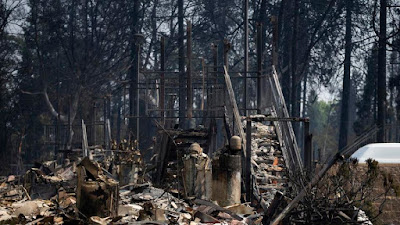 The City of Phoenix has been wiped off the map by the firestorm that moved through the Rogue Valley in recent days.
Pandemic Diary
Day 180

As I write this, the sky is a smoky slate gray outside my window. I just heard our water supply is okay in Medford, but  nearby Talent and Phoenix residents aren't so lucky.

They have been warned by authorities to boil the water in their cities because of bacteria in the systems. Both cities are disaster zones that are closed to all but residents.

Nearby Ashland, where the fire started here in the valley is still only 50 percent contained. Thus far, I'm aware of three people who have perished in the firestorm from the Talent and Phoenix areas. Authorities expect to find more bodies as they go through the scorched land.

The air quality here in Medford (and the valley) is hazardous and M-95 masks should be worn - not just for COVID - but to filter the thick ash in the air.

The thing that really pisses me off today... authorities are pleading with the public to only trust and share information verified by official sources because a bunch of right-wing and QAnon wackos are claiming all the fires have been set by "Antifi" members!

This incident highlights how online conspiracy theories, a sustained right-wing campaign to create increased fear of anti-fascist groups, and amplification of false claims by QAnon followers have real consequences.

The FBI responded to the false claims yesterday, saying they weren't true. State authorities also confirmed the rumors were bullshit. But the militia/Trump creeps are out there with their weapons looking for trouble.

It's hard to believe this is what our society has sunken to. Even natural disasters created by climate change are politized and weaponized. It's sickening.

The latest state count reveals over a half of million people have been evacuated from their homes. This is a fluid statistic as fires are still raging up and down the state.

North of us in Portland, the mayor has declared a state of emergency, closing city parks and activating evacuation sites for people in threatened areas.

There's thirty-seven active wildfires as of yesterday. For the last 10 years Oregon we've seen an average of 500,000 acres burned each year. So far, we've had 900,000 acres destroyed...and still counting.

My heart goes out to the millions of Americans fighting and fleeing from this horrible West Coast firestorm. It can't be over soon enough.

Quote for the Day: "Always remember...Rumors are carried by haters, spread by fools, and accepted by idiots."  -Ziad K. Abdelnour
at September 12, 2020