Our First Evacuation: The Rogue Valley Firestorm Came Like a Freight Train 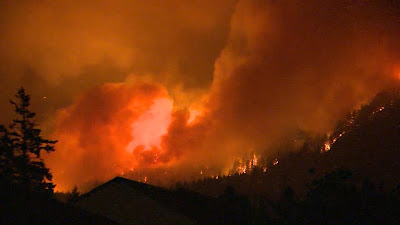 Thus far in 2020, everything has been surreal - like something out of the apocalypse or the Bible describing the End Times. I'm know I'm being dramatic... but damn it, that's how I feel.

My wife for 46-years and our five animals - two dogs, and three cats - were forced to flee from our house in Medford, Oregon when strong winds carried wildfires through the Rogue Valley like a freight train.


A wildfire broke out in Ashland two days ago and within hours the powerful winds carried the flames down the I-5 corridor forcing the 82,000 inhabitants of Medford to flee for shelter in the state fairgrounds by Central Point.

Shirley and I are first-comers to experiencing the devastating effects of a natural disaster. We never thought something like that would happen to us. The shock is both sudden and surreal.

As we tried to calmly gather up our important papers and processions an orange glow lit up the sky. We went from level 2 warning to a level three within hours before being warned to evacuate our neighborhood.

The animals were a challenge. We'd loaned out our cat carriers and were forced to load up our three very scared felines with blankets wrapped around them. Not easy. The dogs were easier with their harnesses on. 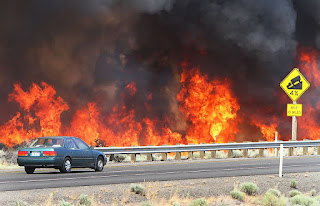 As our packed little King Cab pickup made it's way to the shelter fires were breaking out and literally following us north.

At times the embers were in front of our vehicle. The wind gusts were driving the flames along like devils running alongside us.

Traffic got heavier as we neared our destination. Long lines of pickups and sedans streaked in a steady stream toward the safety of the fairgrounds. Flashing lights and sirens filled the chaos with a sense of urgency and desperation. Our dogs whimpered in fright as they sensed the danger in the air.

The sky was a dirty bronze hue colored with blazing flashes of bright red and orange when we arrived at the shelter. Community volunteers were directing traffic and Red Cross volunteers handed out water and food. There were stockpiles of blankets and animal food.

When we finally parked we were fried. Adrenalin had carried us that far but we were feeling the effects when we slumped in our seats and waited. 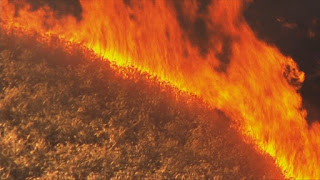 There was no thought of sleeping inside the shelter. Not in these days of COVID-19.

We'd brought water and food for ourselves and the animals and were content to sit there all night.

Which we did, before going home the next day, haggard but happy when we learned our house didn't burn down! With the destruction all around our area we felt like it was a miracle our neighborhood still stood.

The one big thing that stands out to me, in retrospect, was the lack of emergency communication in the entire Rogue Valley.

There was none! We learned more from Facebook friends than any local authorities who were scrambling around trying to keep up with the firestorm engulfing the valley.

The lesson is clear here in Medford... the authorities better get their shit together, because this fire season isn't over yet!