Trump's Coronation: The Pandemic Has Passed and Other Bigly Lies 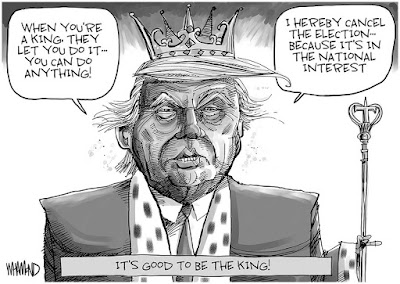 Dear Diary,
Before commenting on the latest Trump coronation abominations, I want to point out something the Trump regime didn't want Americans to know about:

This story broke yesterday
Multiple US troops were injured in a collision with a Russian military convoy in eastern Syria on Tuesday, according to several US officials who reported the incident to CNN.

Despite Trump and military leadership at the highest levels being aware of the incident within a short time of it occurring, the Pentagon has still not publicly acknowledged that Americans were injured.

The reason why is simple and sinister; Trump doesn't want anything to detract from his coronation ceremonies. US soldiers being wounded by Russians in Syria may spoil the spell he's weaving at his coronation.

What Happened at the Coronation
Viewers were led through an alternate universe where the pandemic has passed, and a sitting secretary of state mixed diplomacy and politics in a speech from Jerusalem, effectively violating state department rules that he had signed on to.

The tsunami of lies throughout the performance swamped any attempts to unite - or recognize - the pain Americans are currently experiencing.

Her mockery of a WWII uniform was a bit over the top, but then so were many other things that night.

The coronation was a celebration of cultural wars, rebukes of liberal ideology and stories of Americans who say they have benefited from Trump's policies.

I'm not sure where they found the dairy farmer/Trump minion, but her praise (supposedly on behalf of all diary farmers) rang pretty hollow when you look at the damage Trump's trade wars have done to farmers across the country.
They have to be bailed out annually now thanks to Trump's American First policy.

Then there was Trump's nightly appearance where he pardoned a bank robber in the White House, and also swore in five new Americans in a clumsy ceremony that was supposed to show he loved immigrants.

Trump lackey Sen. Rand Paul pained a picture of Trump as a philanthropic president. I noticed he forgot to mention Trump's family-run phony charity that was shut down for ripping-off veterans and other Americans.

Listening to another Trump lackey Larry "Shameless" Kudlow promise that Trump will be able to turn around the economy again (it was growing when Trump slithered into office) was enough to make most pundits puke.

But when Kudlow told everyone that they were better off now than they were under the Obama administration, I expected to see lighting strike the building. As he droned on about Trump's victory over the coronavirus, I had to drink a Pepto Bismal cocktail to stomach it.

Also hard to stomach was super hypocrite, Cissie Graham Lynch, American evangelist Billy Graham's granddaughter. She ranted on about being obedient to God or to Caesar, and how the radical left would force people of faith to violate their deeply held beliefs.

Again, it was hard not to lose my lunch when she actually claimed Trump was a fierce advocate for God. Still no lightning strike, but I bet her grandfather turned over in his grave.

There were other sickening sideshows featuring a wealthy brat, Nicholas Sandmann, defending Trump against the anti-Christian, anti-conservative, media outlets...

and
Abby Johnson, founder of the ant-abortion group "And There Were None," who made explosive claims (actually lies) about her time working for Planned Parenthood.

She earned her Trump credentials by tweeting that she had a hard time understanding how people can't see the connection between abortion and the Jewish holocaust.

There were other cult supporters during the chaotic program to celebrate an alternate reality TV president that I'm not even going to mention here. I understand the reader can only take so much!