Day One of Trump's Coronation Was Full of Newsworthy Stories 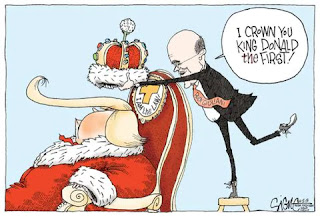 What a day of infamy for the RNC yesterday after crowning Trump King and the Chosen One.

There were other newsworthy stories that broke yesterday too. Here's some examples:

**New York's attorney general is investigating whether Trump's company inflated the value of his assets to secure favorable loans and insurance tax benefits.

If the NY State AG's request from the court is successful, Eric will have to testify. Just a thought; think how terrifying that must be for daddy Trump who knows he's an idiot!

Parting is Such Sweet Sorrow

**A bombshell dropped on Trump yesterday when his most loyal, and longtime subject, Kellyanne Conway announced she was leaving the White House to devote more time to her four children.

Even hubby George Conway had a big announcement... he was stepping away from The Lincoln Project to also spend more time with his kids.

Kellyanne's swansong will be today as she appears as a guest speaker for Trump's coronation ceremonies.

Postmaster DeJoy Grilled by Congress
**Highlights include Rep. Carolyn Maloney, the chair of the House Oversight Committee telling Louis DeJoy if he doesn't turn USPS documents over to the committee he can expect to be subpoenaed.

The hearing was basically reality versus an alternate reality pursued by Republican minions. Democrats produced documents and other evidence, and Republicans continued to stonewall with conspiracy theories.

My concern is that nothing much will come from the revelations of corruption as the Trump regime continues to muddy up reality with his bully pulpit.

Family Skeletons Rattling in Trump Family Closet
After Trump's niece, Mary, wrote a scathing book about Trump's upbringing last week, his sister Maryanne Trump Barry made news when a secret audio of her disparaging her brother was reported by the press yesterday. She made it clear that he was a serial liar.

I could mention other newsworthy events that overshadowed Day One of Trump's coronation, but I'll spare the reader. I believe the point was made.

Quote for the Day: "A good newspaper, I suppose, is a nation talking to itself." -Arthur Miller
Posted by ImBlogCrazy at 7:25 AM