Pandemic Diary Day 139: Where Were Our Politicians When Emergency Funds for Millions of Americans Ran Out? 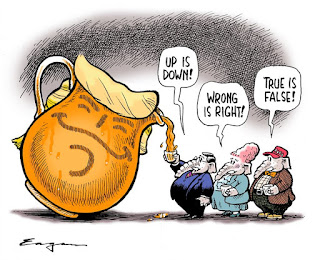 When Congress failed to restore emergency stimulus funds for millions of Americans Friday, it plunged our beleaguered country even deeper into the current maelstrom.

For the record, I've documented who, what, when, and where some politicians and political pundits were when the current lifelines to desperate Americans were severed as the deadline ran out Friday night.

As the country remained in numerous intensifying crises from the raging coronavirus epidemic to anti-racism protests and benefits running out, Trump played golf. And tweeted lies and conspiracies.

"Mr. Not Having Time" to play golf because he'd be too busy when he was elected, logged in his 283rd trip to the golf course while in office, and his 376th day at a Trump property.

While Trump played golf (ala Nero playing the harp while Rome burned) the US death toll from COVID-19 topped 153,000 with more than 4.5 million cases - by far the largest totals in the world.

One of a group of maroons that defies face mask wearing in the Capitol, Louie "Gomer," has been strutting around like a rooster without his face mask on. After finding out he had the coronavirus Wednesday, Louie had to go into quarantine.

So, he spent his Friday claiming he may have got the virus by - wait for it - wearing a face mask. Oh, yeah. He said that in a video for the alt right face mask idiots.

Department of Homeland Security acting undersecretary, Brian Murphy, was removed from his post and reassigned to a different, undisclosed position Friday when word got out what he was doing in Portland.

Murphy was compiling reports on journalists in Portland, Ore., and collecting electronic messages belonging to protestors. He was even making up "Baseball cards" of protestors and passing them out.

Democrats are calling for an investigation.

In a piece published Friday, political pundit Joe Scarborough chastised the self-described conservatives who remained silent earlier in the week when Trump touted the idea of delaying the 2020 election over debunked concerns about mail-in voting fraud.

For the record, the orange anus can't delay the election. Period.

U.S. Republican Rep. Jim "Gym" Jordan was playing to the cameras Friday morning as he bullied, belittled, and attacked Dr. Anthony Fauci during a House Oversight and Reform Subcommittee hearing on the coronavirus crisis.

As usual he was playing for an audience of one, his master Donald Trump. Anyone who happened to catch the exchange between the two could see what a dramatic clueless moron Gym is.

Friday was another stark snapshot of how dysfunctional our government is.