Pandemic Diary Day 143: History Will Remember Trump For Being a Serial Liar 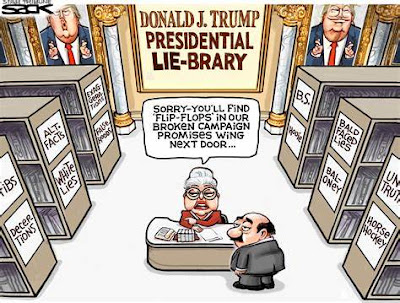 With over 20,000 documented lies to his discredit, Trump has set a leadership bar so low it will likely never be challenged in the foreseeable future.

When I'm finished writing this post, I'm sending a comprehensive list of Trump's lying statistics to the folks at Guinness Book of World Records.

In other words, the perfect publication to feature our serial liar-in-charge. The editors may even feature Trump's artificially bronzed face on the next cover if everything works out.

Being a world-class egotist, Trump will feel honored to be featured in the latest edition of Guinness Book of Records. He'll also probably sue the publication - because that's what he does - but will eventually lose in every court in the land.

Another possibility: negotiate cover deal and let Trump use that portrait of himself that he used to rip off charities (it's his favorite) and in return he would agree not to sue Guinness. Observation; this offer only works if you're dealing with a malicious narcissist.

Trump's talent for telling lies puts him in a special category among American presidents. Watching him speak during his press briefings/rallies is like stepping into an alternate universe where up is down, and down is up.

Historians watching videos of Trump will be struck by his ability to lie without batting an eye. And how stupid he really was.

More New Books I'd like to See on Trump

1) Trump Tells All: 'How I Fooled Everyone'
An insider's look at how corruption became rampant during the Trump regime and how the Republican Party enabled him to do whatever he wanted. Telling scenes like Lindsey Graham kneeling before Trump's tiny trumpet, flesh out the whole sordid story.

2) The Art of the Lie: Trump Reveals His Techniques
Trump spins tales of how lying got him where he is today, and how important telling a bigly lie can be for a reader's career. This book is the closest thing to scholarly he's ever done by sharing his unmatched ability to lie. A master's edition on how to deceive in 10 easy steps by his favorite ghost writer.

3) How Whining, Even Though You're Wrong, Can Be Weaponized
With input from Trump's closest minions, this manual for manipulating people takes the reader through a series of situations where whining can be a winning preposition when cornered by facts. A special section features GOP Cry Babies to watch for in 2021 politics.