Pandemic Diary Day 86: Why Biden Should Be a One-Term President 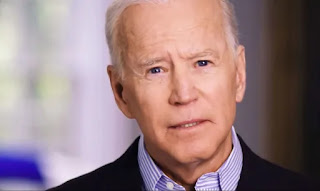 He's a regular Joe. Just like you, and I. He's a people person with a love for this country that guides him.

Biden is what America needs right now. A normal president, and not a wannabe dictator. Joe unites. Trump divides. His ability to reach out to minorities is critical right now, as he enjoys overwhelming support from the black community.

Why one-term is enough for Joe

He isn't going to be a progressive juggernaut instilling major reforms. His job is to un-do most of the things Trump's done - like neutering the EPA and restoring America's standing with the world and our old allies.

While Joe is the perfect foil in the moment against an unhinged Trump, we can't count on that being the case in 2024. Timing is everything. Right now it's Joe's time.

Regardless of how comfortable most people are with Joe today, the kind old uncle image is only going so far. He's going to be attacked relentlessly in the next four years by Republicans who'll cast him as a doddering old fool out of touch with the country.

The fact that Joe isn't talking about serving two-terms is a good for two reasons; one, the country won't be secondary to a re-election campaign like in Trump's case. Two, whoever he picks as his VP is going to be a woman, and a strong presidential candidate for the Democratic Party in 2024.

At this moment in our history the country needs a caretaker, a healer, and someone who'll unite all Americans into a common cause of equality and justice for all.

On the Homestead - Medford, Oregon 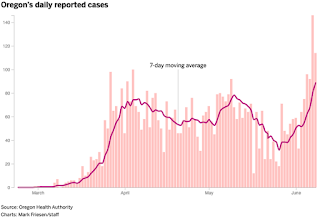 I knew it!
All along I've been wondering why no one's talking about the upward trend of the virus in Oregon. It's been downplayed for reasons unknown to me.

What I do know is more Oregonians have been identified with coronavirus in the past week than any point since the pandemic began, according to the Oregon Health Authority.

At the same time, residents in the hospital with the virus spiked by 40 percent. There's been 620 confirmed or presumed COVID-19 infections in the past week, including the state's largest and second-largest daily case totals of 146 on Sunday and 114 on Monday.

Quote for the Day; "Empathy healed the moment. Words were not necessary when compassion created understanding in grief." Mala Naidoo
at June 10, 2020