Pandemic Diary Day 84: USA Has Been Going the Wrong Way Since Trump Was Elected 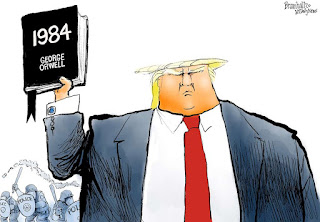 If it wasn't for the electoral college America could have gone in another direction.

Away from calling white supremacists "...good people too."

The day Trump was sworn in, democracy took a hit like never before. A sociopath, con man, and egotist set about stripping away people's rights and protections in pursuit of a dictatorship.

After three-and-a-half years of his ruinous reign, the majority of Americans think the country is going in the wrong direction.

It's official
According to a collection of polls released yesterday, 80 percent of Americans believe we're going in the wrong direction. That's a massive majority of very unhappy, and worried people.

It's taken his total lack of leadership during the pandemic and the national protests for equality and justice, to fully expose what a despicable leader he is.

Fun fact: Trump is approaching 20,000 fact-checked lies this week. Are they finally catching up to him and causing problems? It appears so. You can't lead when people no-longer trust anything you say.

It seems like an eternity between now and November 3rd. That's because I don't know what horrible thing(s) Trump will do tomorrow, or the next day. Continued chaos is guaranteed.

I'm surprised to see the call for racial equality and justice for George Floyd turn into a worldwide protest. There's been a strong fascist movement marginalizing minorities in Europe and other countries for too long.

The widespread pushback by citizens in major cities got it's spark here in America with the Black Lives Matter movement. We should be proud of that.

Now that the fire has been lit, and the challenge picked up, America has a chance to show the world we are still the leading democracy that bears duplicating.

For this to happen, Americans have to dump Trump at the ballot box.

Whether it's in our police departments, fire departments, or the government itself, we need to set a shining example of democracy for people around the world. 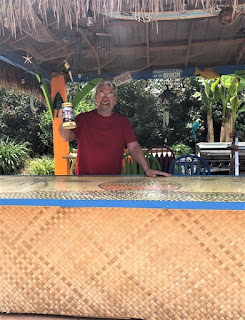 Cheers!
It's beer-drinking time at the bar in our backyard.

The weather has been nice - a little rain on the weekend - but week days have been warm (80s and 90s); perfect for gardening or drinking beer.

**Not good news
Forestry officials are predicting a severe and complex wildfire season amid a drought and COVID-19.

To make matters worse, officials are still searching for money to pay for it! I sure hope the Rogue Valley isn't filled with smoke again like two years ago. Our air quality was the worst in the nation for over a week!

**COVID stats - No new deaths - number is still 161. Confirmed coronavirus cases climbed to 4,570. We still have a slow upward trend of cases and have not leveled off, yet we've entered Phase Two of the state reopening. Not sure what to think about this.

Quote for the Day; "It's better to walk alone than going with a crowd that's going in the wrong direction." -Anonymous
at June 08, 2020