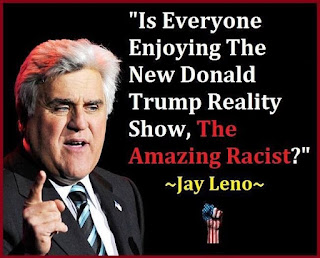 Nationwide violence marred many of the earlier protests over George Floyd's murder.

After two weeks of continued protests, arrests have shown a common denominator among the rabble rousers... they were white supremacists mingled with other groups who hate blacks and minorities.

I've read reports that organized gang members also took advantage of the chaos to systematically loot in their own neighborhoods.

As I watched a video of Virginia's Klu Klux Klan leader drive his pick-up truck into a crowd of protestors a couple of days ago, I couldn't help but think about Trump's infamous Charlottesville comment, "There's good people on both sides," - referring to white nationalists on one, and protestors against racism on the other.

The groundswell of outrage and empathy resulting from Floyd's death marked an inflection point in the American racial conscience.

That point turned into a symphony stating the case for racial equality, and reverberated around the world with protests breaking out from London to Paris in sympathy.

I'm somewhat heartened to see the most recent NBC/Wall Street Journal poll that was released Sunday. The results showed Americans by a 2-to-one margin are more troubled by the actions of the police in the killing of Floyd than by violence at some protest.

But Trump, the great divider, wants to "dominate" protestors and "start shooting when the looting starts." His hardcore approach that police are heroes and protestors are criminals worked in 2016. The so-called Law and Order candidate resonated back then.

This is 2020 and the majority of Americans have had enough of Trump. They see what he's done to the country in just three-and-a-half years, and fear what four more years could bring.

Stopping intrenched racial bias in any police department is difficult and almost impossible unless everyone is fired and all new people hired. Even then there's no assurance that everything will work out between the new hires and the public.

I've seen what I thought were other turning points in history during the last 70 years, and was disappointed when the conversations slowly disappeared into the political maelstrom of politics and polarization.

Therefore, I find myself skeptical this movement for racial equality will achieve what some hope it will. Good things may come out of it. I sure hope they do.

If Trump's hardline handling of the protests becomes another factor in his loss to Joe Biden in November, then some progress has been made. Getting rid of a racist president should go a long way towards healing. 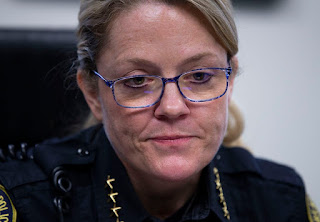 Portland police chief Jami Resch (Photo by Beth Nakamura/Oregonian)
stepped down and had an African American lieutenant fill her job.

Not six months into her job Resch resigned from her position yesterday.

The stunning change in leadership comes as city police are under fire for their handling of massive protests across the country.

Meanwhile protestors took to the streets for the 11th consecutive night of demonstrations against police brutality and systemic racism.

**It's quiet in Medford - Very few people are out and about downtown. A lot of small local businesses opening to less than 50 percent capacity, following safety recommendations.

I'm still not comfortable enough to eat out yet. The way I see it, cases of the coronavirus are still on an upward trend in Oregon. They may be going up slowly, but they're steady.

Quote for the Day; "In matters of conscience, the law of the majority has no place." -Mahatma Gandhi
at June 09, 2020