Pandemic Diary Day 24: A Primary During a Pandemic, Stop Briefings, Iggy vs a Bee 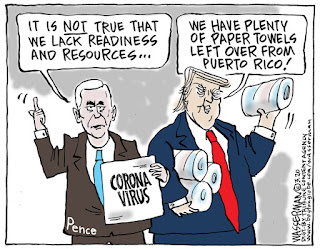 Thanks to the conservative majority in the Supreme Court, Wisconsin voters were faced with a choice yesterday; obey the governors orders and stay at home (in essence forfeiting their right to vote), or get in ridiculously long lines to vote in-person and risk getting COVID-19.

No sugar-coating it... the Supreme Court has chosen a GOP agenda over the health of Wisconsin voters who risked getting COVID-19 to vote in-person.

GOP ideology has successfully superseded public safety in another court power grab. One more blow to democracy.
---
**When is cable news going to quit covering Trump and his pathetic Task Farce? Can't they see he's using them like puppets for his daily campaign rallies? Actual news seldom comes out of them anymore.

I realize people like to watch Trump entertain them by attacking reporters and facts freely and without inhibition, but this charade has gone too far. Too many lives are being lost because of it.

After weeks of disinformation, and partisan campaigning, it's about time cable news rooms everywhere re-evaluate their coverage of the buffoon. Let the mainstream news give a few soundbites (if merited) during the 5:00 o'clock news.
---

On the Homefront - Medford, Oregon
**The differences between northern and southern Oregon have been well documented by social scientists.

What I'm seeing is people in Portland who are ignoring social distancing rules despite the state mandate, and folks here in Medford in almost perfect compliance. The difference between north and south this time may be judged by lives lost.

**Speaking of lives lost, Oregon has had 34 deaths thus far, and 1181 known cases. Some healthcare experts are predicting the virus may peak in a couple of weeks, as long as a worst-case scenario doesn't happen.

**Pet talk - Our Iggy, Butters, was chasing bees yesterday and managed to catch one in his yap... much to his dismay! Little lumps sprang up almost immediately on his head!


Shirley went and got some Benadryl and gave him some.

It helped, but not before the right side of his little face was swollen and his lip drooped.

Amazing how fast it did work however. An hour later and he was fine. There's no doubt in my mind he didn't learn his lesson... I expect him to be chasing bees again today.
Another Pandemic day gone by.
at April 08, 2020